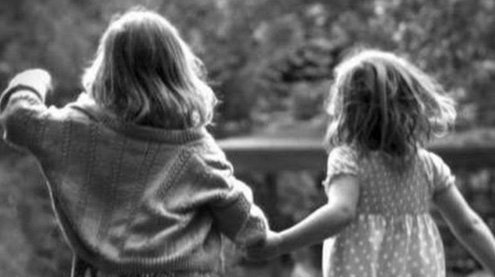 You keep the people you want in your life by caring for and about them.
H

er one line email came like a hand passing through a drawn curtain. “Hello, it’s Kristen.”

Kristen and I parted as friends many years ago under difficult circumstances. Expectations not met, entrenched disappointment, a personality unreliable and distracted. The friendship hurt too much to maintain and it was me who said the painful good bye.

But then came the hand.

Kristen and I met working at a restaurant in our early 20s. I waited tables and she kept the house books. I liked her immediately. Flaming red hair and quick to laugh, we became fast friends. She had a VW Beetle, blue and rusting, and a child from a marriage she’d fled.

She was living with her parents. Their chastisement was implied but not spoken. Our friendship got her out of the house where her life responsibilities felt overwhelming.

In the long endless days of summer we were like sixth-grade girls, fun loving and a bit disheveled. We drank port wine by firelight on state beaches and ran headlong into the racing surf giggling. We dreamt our futures on a checkered blanket and swore a boyfriend could never match our bond.

That changed when Kristen met Louie. The verdict was quick. I was out and he was in.

It was a well-meaning lie, the kind you want to believe. But the change set a different path in motion.

Kristen and Louie married and became an instant family. They added a few more kids. A dilapidated house on the outskirts of town took all their time. Renovations came in fits and sprits as money allowed. When I visited, some project was always midway; the kitchen floor half tiled or a bathroom with walls waiting. A large dog ran wild in the house and it fit the untamed nature of their life.

“I want to reconcile,” she wrote in the next email exchange. It was cryptic and lacked punctuation. She was typing on her iPhone and it appeared dashed off at a stoplight. I suspected the idea of reconciling had been nagging at her, like something that needed exorcising.

“Do you have the same number?” she continued.

I did have the same number but I didn’t reply to say so. I just waited, waited to feel the years since I’d seen her.

I knew her daughters had grown and married. In online photos I saw them glowing. Kristen looked well and rested as the proud mother of the brides. Her youngest son was in college. From the photos I could see Louie was doing well financially and had long ago left the renovation projects of my memory.

When I finally asked Kristen just what she was looking for, it was clearly not the response she expected. She said she’d changed and a lot had happened. The same was true for me but I was somehow not pulled in.

I myself had become quite pragmatic about relationships. If we weren’t communicating already there was probably a good reason. You keep the people you want in your life by caring for and about them. They feed and nurture you.

In the final exchange, Kristen said she needed to pause. I suspected she was confounded by the discrepancy between who she thought I was and how I responded.

My old hurts were still there to protect me. I knew my life was worth guarding. I needed more reassurance. Despite the now almost casual effort to “reconnect” that cyberspace can foster, nothing she’d said had convinced me to take her outstretched hand.