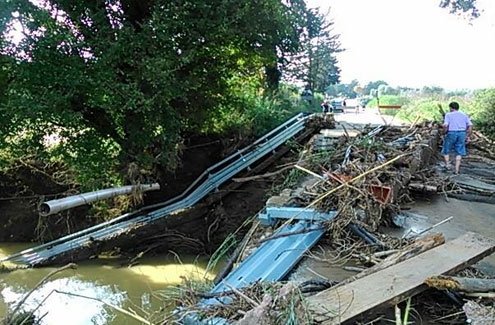 wo weeks into October, the Maremma tasted the end of days. For the second time in two years, our riverbanks exploded, our crops washed away, and two of our own lost their lives.

And all of us found ourselves in the middle of a news story.

The best of us pulled on our boots, hiked up our pants, and started shoveling mud off the roads.

The rest of us rubbernecked; I rubbernecked. Heck, I wasted half a day in my father-in-law’s bright blue commandeered Fiat Duplo trying to see collapsed bridges.

Go ahead. Write me an angry letter.

If you were Facebook friends with anyone in the Comune di Manciano, you’d need a Hummer to get through this week’s photos of flooded fields and mud-splattered highways.

Most of Manciano is arguing online about the phrase bomba d’acqua (water bomb). If you’ve got the stamina, read all 110 comments on the matter and make up your own mind.

Or you can stare at a blank Word document and try to capture the unsavoriness of it all.

I had wanted to tell a story of a small community banding together to help those who lost their livelihoods, their homes and their family members.

But all I can think of is that while Italy watches, we’re fighting to see who can upload the best video of water turning brown and sundecks crashing against the wall at the Terme di Saturnia Spa.

I’ve lost count of the number of conversations I’ve had about the floods. From start to finish, the rain lasted two, three hours, tops. But for double that I’ve listened to people yammer on about their daring, almost-didn’t-make-it, escapes.

I know for a fact that half of them weren’t even on the road when it rained. Still, I’ve had to nod and make commiserating noises.

It’s page five from the manual on acts of God. Everyone was driving that very last car to slip through before the road was closed, another second more and, my golly, they would have been swept out to sea.

Turn that manual’s page to the part about what you would have done if you were the supreme leader of Tuscany, aka the President of the Region Enrico Rossi.

Signore Rossi got into an online spat with my husband the morning after the floods. Signore Rossi blamed the disaster on the ineptitude of local authorities and organizations.

If there’s one thing you don’t do with my husband, who also happens to be our town’s finance appraiser (assesore in Italian), it is make sweeping statements. (I once lost us a game of four-person briscola by claiming I could count cards “Rain Man”- style and he still hasn’t stop moaning about it.)

He spent hours collecting evidence showing that the organizations who failed to issue a severe weather warning report directly to the government of the Tuscany region. The Tuscan regional government paid back with hours of vague comments about perseverance. And then it forgot to mention compensation.

On the radio, I actually heard the president of Grosseto’s Agricultural Confederation, Enrico Rabazzi, say we spend too much time heeding the advice of educated folk and not enough listening to farmers.

You heard the man, chuck those degrees in civil engineering, urban planning and road safety and buy yourself a flock of sheep.

There’s no denying that those of us who spend their lives on the land know it better than those who spend it in front of a computer.

But those of us who watch the skies for a living could’ve looked out the window and seen the rain too.

When I actually logged onto the weather page meteo.it — as the impromptu river pushed my potted plants down the front steps — tiny sun symbols greeted me. For a second, I thought I’d lost my mind.

Because if you turn to the very last page of that manual, you will see the tiny paragraph that says that most insurance companies don’t cover acts of gods.

And when all you see around you are devastated vineyards and agriturismi buried under meters of mud, that’s all that really matters.