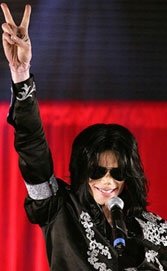 udden death comes to the cooing nation. This time the casualty is an “icon,” a word once applied to describe Greek Orthodox wood paintings. Michael Jackson was anything but Orthodox.

He was instead an insatiable everchild in a nation that increasingly reveres children as beyond-reproach citizens, hailing their sanctity, overprotecting their defenselessness, even incorporating their coos into adult speech.

Jackson, a wildly unstable child patriot, embodied the trend, albeit bizarrely. Phobic about aging, he surrounded himself with emissaries from a protected of lifetime he sought at all costs to foster and preserve. America is no stranger to fetish-bound eccentrics: Howard Hughes adored airplanes and was scared to death of germs. Kid’s stuff.

Intellectualism’s equal and opposite reaction — Newtonian physics applied to social anthropology — is social infantilism, particularly when agreed upon by adults. It accepts the erasing of the distinction between babble and maturity, in which maturity is seen to restrict cuter, simpler (ergo more sincere) expressions of language and body.

Motherhood, a state of grace put aside in the five-decade-long thrust toward emancipation, has staked out a more aggressive perch. Membership in the maternal club — at least in its affluent, non-nanny precincts — not only scrubs away lewdness, but (with an assist from divorces) produces a midlife tribe of little people inhabited by proxy, children as defining adjuncts.

This transformation modifies earlier emphases. Generations worked to codify the child-to-adult passage as a rite. Grunts belonged to children, enforced lucidity to adults. This transit affirmed the development of the intelligent and competitive self. The attaining of general intelligence summed up the passage.

But the end of ideology and class restraints, as well as the addition of pre-packaged data, has reworked aspiration’s ambitions to fit a less demanding egalitarianism. Child-talk among adults reflects an unassailable democracy of speech.

This loose democracy of focus — indulgence made easy — doesn’t hew to rules, making it childlike by definition. Insisting on more mature norms becomes inconvenient in a time when convenience is paramount.

In his memoirs, John Quincy Adams recalled the way his mother saw the child-adult gap, its bridging part of a goal. “My dear mother’s constant lesson in childhood,” wrote Adams, “was that children in company should be seen and not heard.”

But there’s a more cynical aspect. For some parents, the only truth is infant incoherence. The gurgle is pure. Child-babble will soon be replaced by adult connivance. Children will soon outgrow their husks, trooping toward adult betrayals in a complex and unforgiving society. Admire innocence while you can.

Everchild Michael Jackson certainly tried. But he gradually lost his youth, his money, even his ability to function in society, to then veer over and out.