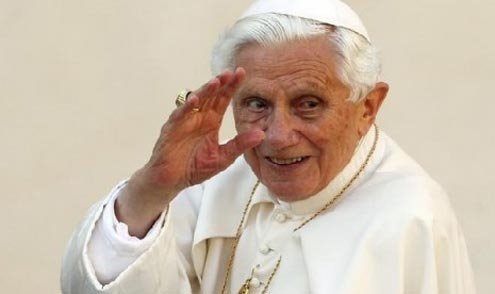 It will be interesting to see how the next pope handles Ratzinger's hot potato.
I

talians are notorious for complaining that their country is in perennial stagnation. “Everything changes but nothing ever changes,” goes one popular adage. “When one pope dies they make another,” goes another. In literature, Romans once boasted their streets were “paved with the bones of emperors,” suggesting pride in their cultural legacy, a legacy that is both rich and imprisoning.

February 2013 may go down in the annals as a month in which major change came to the ancient Mediterranean peninsula. In one short month Joseph Ratzinger — Pope Benedict XVI — quit the papacy as if he were a disgruntled postal worker and not the Bishop of Rome, Vicar of Jesus Christ, Successor of the Prince of the Apostles, Supreme Yadda Yadda Yadda… and Italians voted overwhelmingly for a political party led by a comedian (okay, so that’s happened before).

The question on everyone’s mind is, What now? Global media is buzzing with analyses, prognostications and predictions about what the coming months will bring. Parliament is in a potential straightjacket. President Giorgio Napolitano is nearing the end of his seven-year term, giving him less leeway to control the chaos. And the papal throne is vacant.

Meanwhile some of us just watch the fireworks and try to make sense of what can sometimes seem like a senseless country. I’m undecided about the Movimento 5 Stelle (M5S). I didn’t vote for it, but I recognize its presence gives the Italian parliament a much-needed makeover. The movement is more secular than ever, has more women than ever, and as a parliament bloc is younger than any Italy has ever seen. So far, so good.

But I’m also skeptical of them. I’ve never thought highly of Beppe Grillo even when he was just a funny man. His humor has always had a tint of rage, and by now I find his Angry Guy shtick irritating. To his followers, however, he’s something of a guru. Will newly minted deputies simply await their orders as posted on Grillo’s blog? We already have a government that takes orders from a rather different media guru: the pope. We don’t need another one.

Grillo also seems to have embraced the neo-Fascist CasaPound movement, going so far as to say they’d be “better them than Monti” in parliament – a reference to caretaker Prime Minister Mario Monti. It’s unclear whether M5S is on the extreme left or the extreme right, but extremes have a way of curving around to meet each other. M5S may be deliberately mixing up traditional positions to try to erase left-right distinctions altogether.

Or perhaps Grillo’s movement is trying to prove it’s open to everyone by becoming a kind of orphanage for the politically disenfranchised. But an open door policy can also backfire: keeping an open mind is a good thing unless your brain falls out.

When confronted with extremes I run for the center. Italy’s past is littered with culture wars between political extremes. In practice both extremes have been disastrous for the societies that have been their playgrounds. The tragic message of recent elections is that the center (read: Democratic Party and Monti) is weak and characterless and losing ground to radical populist politics.

If the rise of the M5S owes a debt to savvy Internet use, many also would hold the Internet at least partially responsible for Joseph Ratzinger’s resignation. Ratzinger was the first pope in the age of social media. The Vatican may be adept at manipulating the traditional media (especially in Italy), but it has met its match on the 21st century Internet.

Benedict XVI’s now defunct Twitter account, @pontifex, sent roughly 50 tweets before closing up shop on the last day of February. In its few months of activity it was the target of an enormous amount of satire from the merciless Twittersphere. This must’ve been discouraging to the ageing pontiff (or his lackey) who, revealingly, followed only himself (in various languages).

Scandal is old hat for the Vatican. Historically, it has been able to weather bad news by controlling access to its archives, censoring those within its folds, brainwashing large segments of society, and mastering the art of doublespeak. For a long time the world deferred to the Catholic Church out of “respect,” undeserved respect. Now, centuries of secrecy and confidentiality are ending. It will be interesting to see how the next pope handles Ratzinger’s hot potato.

Change frightens people, especially those accustomed to living in a small world populated largely by their own relatives. But Italy, despite itself, is evolving. Don’t let anyone tell you otherwise.