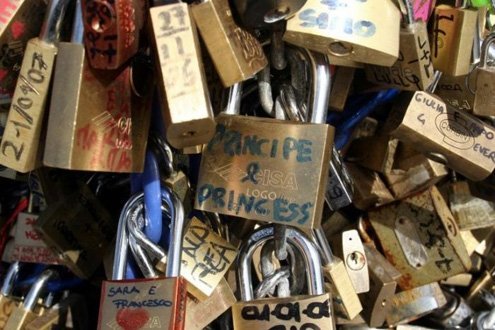 Love locked in on Ponte Milvio.
I

sat on a bench by the Ponte Milvio at sunset, waiting. He was ten minutes late. To pass time, I lit cigarette after cigarette, discarding the butts in the flow of a nearby water spout. I do not smoke.

After the first cigarette, I felt heady as the nicotine hit my bloodstream. After the fourth, I was nearly delirious. Around me, scenes from a movie. I wasn’t sure which. The piazza was abuzz. Vespas and Smarts and Fiat Cinquecentos zoomed in and out and about. Suave men with chiseled features swigged Nastro Azzuros while pretty young things in short shorts and high heels preened for them. Everyone was talking, laughing, eating, drinking, smoking.

I sat back, lit another cigarette.

Twenty minutes late. I put on my iPod headphones and summoned up a song randomly. Louis Armstrong’s version of “What A Wonderful World” came up — the perfect soundtrack for a late summer evening in Rome.

I was meeting a guy named Stefano, the son of a friend of my Italian father. It wasn’t a date, to be sure, not like the one I had the previous afternoon with an actor from Turin named Alessandro.

The following day, in the unbearable late afternoon heat, we met over caffé freddo in the Piazza della Repubblica. I found out that he was 32, instinctive and spontaneous; he found out that I wouldn’t let him kiss me in public. After an hour, he was holding my hand and calling me his piccolo mostro (little monster). It was fun, until it was tiring, and then I made up an excuse to leave. No, this definitely wasn’t a date.

When Stefano finally arrived, we grabbed some Heinekens and potato chips from a nearby kiosk and hopped atop the bridge overlooking the piazza. Conversation was stilted, which is to be expected when you enlist your father to find you friends. After a half hour or so, we were joined by Stefano’s girlfriend, Giulia, and friend, Marco. Plans for the evening were cemented in rapid-fire Italian, and within minutes, we were zipping across Rome to a tiny Napolitan pizzeria in Prati. We settled into an outdoor table and ordered another round of beers.

Of the foursome, it was obvious who was the odd man out. As Stefano, Marco and Giulia discussed an upcoming trip to Sardinia, I struggled to keep up. Screw Dante, dining with three twenty-something Romans was a true test of my language abilities. At times, my mind, weary from translation, wandered. It went to Manhattan’s East Village, where many a late evening was spent in similar fashion the previous summer. It went to the crowded house parties, afternoon coffee dates and thesis study breaks of college, which had ended the previous month. It went around the world, from Barcelona to Beijing, Guatemala to my home island of Guam.

No one ever said packing up my life and moving to Rome after college without job, plan or a visa would be easy. Brave? Yes. Exciting? Most definitely. Easy was not one of the words that jumped to mind.

I am more fortunate than most. I have shelter, food and a generous, if slightly insane, network of family members scattered across Italy. But friends, I don’t have.

I continued to watch Stefano and his posse as they joked and laughed across the table. I yearned for similar camaraderie, the kind that only exists when you’re surrounded by your very best friends.

At the end of the evening, in proper Italian fashion, Stefano and Giulia dropped me at my aunt’s apartment on the opposite side of the city. I thanked them profusely for the evening, kissed them on both cheeks, told them to add me as friends on Facebook.

Once inside, I shuffled around, trying not to make noise. I changed my clothes, washed my face, checked my email. I was tired, but restless.

Again on my own, I lit another cigarette.

About the Author: Jessica Arriola Marati

Jessica Arriola Marati is a freelance writer based in Rome. Born in San Francisco and raised on the Pacific island of Guam, Jessica caught the travel bug early. Half Chamorro and half Italian, she has spent most of her life studying her two heritages. Jessica graduated from Princeton University in 2008 with a B.A. in history. But magazines are her passion; she has interned at CosmoGIRL!, Quick & Simple and In Style in New York and contributes to many publications and websites. In her spare time, Jessica enjoys sampling new cuisines, reading voraciously, scouring budget airline sites for new travel destinations and blogging about her adventures.