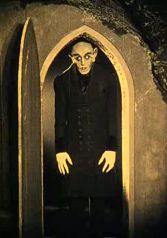 Max Schreck’s lustful Count Orlok is a revulsion for the ages. Hundreds of horror films have vainly mimicked his gaunt menace. His rodent-fanged face devoid of human traits established a yardstick for the on-screen monstrous. F.W. Murnau’s 1922 silent classic is the first of the Bram Stoker Dracula genre to make it to film and in many respects the most enduring. Unmarred by verbal static, Schreck’s metamorphosis is shockingly feral.

The plot: When the recluse Orlok expresses a desire for an new residence, his agent (Knock) dispatches young estate agent Hutter from Bremen to the count’s outland castle. In relentless semi-darkness, Hutter and wife Greta plunge into the underworld. Orlok’s horrifying aspect — seen only briefly — may have its origin in photographs Murnau saw of World War I victims of gas and disfigurement.