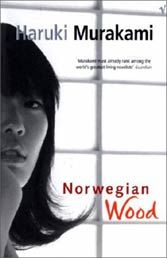 Murakami’s wildly successful first novel might well be his best. The book presents Murakami’s favorite conceit: wan men who court the affection of mysterious women with their future depending on the outcome. But “Norwegian Wood” has an autobiographical freshness that rescues the story from its more maudlin tendencies.

When Toru Watanabe, in his late 30s, hears The Beatles’ “Norwegian Wood” on a jet in Germany he’s reminded of his teenage years and his first infatuation, the guitar-playing, neurotically-ruined Naoko, who is institutionalized. Naoko’s counterweight is Midori, who is Watanabe “real world” girlfriend.

Murakami revels in this sexual and psychological yin-yang. He’s a contemporary romantic who imagines women that exist almost outside gender — women as virtual moods — and embroiders a reality to suit the quirky demands of the vision. Few writers are as tender with adolescent foibles, making Murakami (who can write beautifully at times) a sort of pop delight.