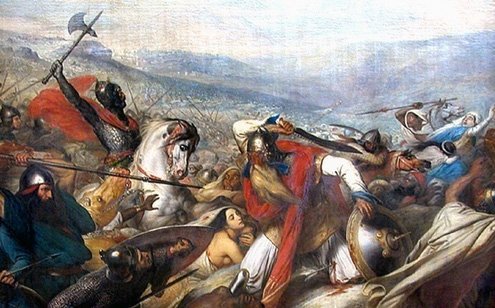 harles “The Hammer” Martel’s troops mass on the banks of confluent rivers, the Clain and the Vienne, looking west with the water. To trick an Arab you must think like one. The Hammer knows this.

Bigger wars will be waged, and lost; nations lie ahead for making, and dissolving; markets will be created, rise, and fall. But The Hammer is not interested. He is not a modernist but a Merovingian. Give him a map (not MapQuest) and he’d point to Islam.

Abdul Rahman is a captain of the greed, a general with a penchant for tough tasks. His armies have crossed the Pyrenees into France. True, Hannibal overcame the Alps in the other direction. But not with a force this size, 30,000 men. Abdul is not easily impressed but this time he is impressed with himself. His march is pure highlight reel.

History is at its best where memory won’t reach.

It is October 17, 752 and 30,000 Islamists soldiers are parked in French wine country before wine. Before France, in fact. They are Berbers, Moors, savages, sages, scientists, alchemists, soldiers, mercenaries. They have no cannons, telephony, telegraphs, electricity, dynamite. The pods they know are bulbous sheaves for heavy swords.

Not much different for The Hammer. No one shaves because nothing is sharp but knives. Men cannot stink because everyone does, Christians and militias alike, scads of defecating legions. There is no rape because it has not yet been circumscribed to ban. For Parmenides, a Greek even older even than the battle at hand, intention is being. A task is what saves you from nothing.

The Hammer does not see himself as the West’s last chance. He’s never read a headline so good. But he knows can’t lose.

Abdul Rahman’s full name is Abu Said Abdul Rahman ibn Abdullah ibn Bishr ibn Al Sarem Al ‘Aki Al Ghafiqi. He’s a Moor from Andaluz, Spain, an Umayyad Caliphate man to the core. To him, The Hammer seems just another gang leader, a thug, a non-entity. He has a Fatwah and a unified cause. Compare that to The Hammer’s fickle Franks, long at war with one another.

The Hammer is Christian by convenience. He wants an empire. Charlemagne, his grandchild, will later get one, pope-embossed and anointed. But The Hammer can’t know this. He has a battle to win and no cavalry, just foot soldiers, and ruses. He is outnumbered.

Imagine The Mother of All Battles coming to a place near Tours. That’s what October gave The Hammer.

Abdul Rahman bore in first with the Berber light cavalry. The horsemen charged and retreated, teasing. These men had worked Spain over to good revues (in Latin), “The faithful pierced through the mountains, trampled over rough and level ground, plundered far into the country of the Franks, and smote all with the sword…”

If they beat back The Hammer, the Caliphate knew, middle Europe’s maw opened up wide, Germany too. Islam head-to-toe, or so it hoped.

Ambition conceals the seeds of its own mistake: First complacency, then greed. Why plunder? Why now? Yet that’s what the Berbers did, swinging around The Hammer’s river bulwark to sack villages, burying into cottages and their women, the rest set aflame. The horsemen took back what they found to add to the rest of the loot.

Abdul Rahman paid little attention. He still had the numbers to win.

He also had it in for Odo, The Hammer’s two-faced ally and a man the Muslims had defeated before. After which the frightened Odo ran The Hammer for help, and The Hammer, surprisingly, agreed to help — so long as Odo gave him everything in return, all of the east and the center, all Odo owned. Odo accepted the terms and chipped in troops. Abdul Rahman knew none of this. Bad intelligence.

Let them come to me. That was The Hammer’s plan. If they want Tours, let them come north through me.

He allowed the sacking around him. Wait. Let them come to me.

And Abdul Rahman finally did. Who knows why. Maybe he feared winter. The October weather had brought early frost. Perhaps he’d grown tired of that unmoving block of ugly men squarely in his path. He had hoped his raiders would frustrate them, but no.

So he charged his full cavalry, and the infantry behind it, Berbers, Arabs, blacks, mulattoes, and slaves, the latter fighting under threat of death.

Just what The Hammer wanted.

And he held. Horsemen with swords and spears stabbed and beheaded his men. But from within the scrum they thrashed back. Later, a reporter wrote, “Firmly they stood, one close to another, forming as it were a bulwark of ice.” As the horsemen pressed forward, Odo’s concealed troops emerged from the forest and further clouted the surprised cavalry. Meanwhile, The Hammer dispatched soldiers on an end-run into Abdul Rahman’s base-camp. “You’re losing,” the soldiers told the slaves. And the slaves panicked. The Hammer’s soldiers plundered the plunder, and encouraged the rear-guard to do the same.

Abdul Rahman, hearing of this — imagine the rage! — bore harder into The Hammer’s phalanx, still hoping to crack it. No good. His men retreated.

Now Abdul Rahman was trapped, hemmed in, as good as dead, and then he was.

That night, as The Hammer readied Day 2 still knuckled down by the river, the leaderless Arabs squabbled, looked at their loot, most plundered at Bordeaux, and turned back to Spain. Why lose sure spoils? It was cold. This is what they thought, and agreed.

The Hammer’s scouts, pushed forward at dawn, found only empty tents. Henry Hallam, an 18th century historian who fell 150 years short of a blog, wrote this: “It may justly be reckoned among those few battles of which a contrary event would have essentially varied the drama of the world in all its subsequent scenes.”

The Hammer wasn’t around to read this flattering ink. No matter. He thrived.

The Renaissance, cathedrals, Enlightenment, doubt, skepticism and Freud; all would follow in due course. But once-upon-an-October, 1,200 years ago, the world found itself at confluent rivers, the Clain and the Vienne, a man called The Hammer wedged near the water’s churning V, waiting.