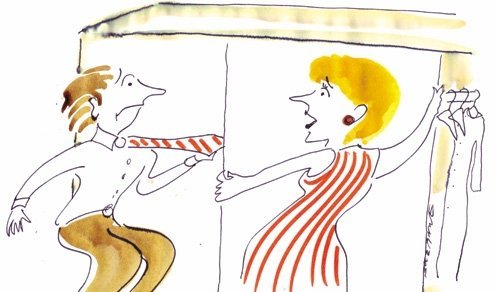 Germano could you please close your door, I need a shirt. Drawings by Suzanne Dunaway.
T

he first apartment I shared with my husband-to-be Germano was a makeshift furnished one-bedroom in the leafy Monteverde section of Rome. We had paper-thin walls and noisy neighbors.

Once married, we decided enough was enough and went looking for a place to call home. That search introduced to us to square meters, mile-high prices and quirky owners. Germano scanned online ads in Porta Portese, Rome’s classifieds magazine, circling his favorites. For months, we trawled Monteverde, Trastevere and neighborhoods near the Vatican. Most of what we saw were fixer-uppers that fell into the “lots of potential” category. But neither us are remodeling wizards.

So we played it by ear. We subscribed to Architectural Digest. We asked questions. We didn’t know Baroque from Rococo but gradually learned to tell truth from hype.

The reward came a year later when we lucked into a dream apartment near Saint Peter’s. The seller was a stylish signora. After some haggling, she accepted our offer. We also bid for her pre-fitted furniture, but only got as far as “buying” the Bulthaup kitchen — sort off. The purchase was minus oven, dishwasher, refrigerator and Bulthaup cabinet.

She was vague about the apartment’s designer. “Was it Massimiliano Fuksas?” Germano prodded jokingly. The Rome-born Fuksas has designed all over the world.

“Couldn’t it be?” she replied elliptically.

Not understanding the Italian nuances, I thought we’d bought one of Fuksas’ designs. We hadn’t.

Still, the apartment was well worth the preliminaries. It had two bedrooms, two bathrooms, and white, spacious rooms. There were columns and niches with wave-like moldings and sliding glass French doors with bumpy white translucent glass from the 1970s. There was a wrap-around terrace and a bathroom with a large travertine marble tub.

When all the paperwork was done — it took seven months from offer to contract — we finally moved in and got ready for our favorite part, remodeling.

Spring Color and Mr. Fontini Before settling in, we decided to give the apartment a fresh coat of paint. In the mildewed cantina, Germano uncovered a half-empty paint can with the “original” yellow-white wall color (tricky in Rome, since paints are often mixed by hand and no one remembers just what they put into “that beige”). After wrenching open the top of the non-synthetic paint labeled “Spring Color,” Germano sprinted for the door, heaving. It turned out “Spring Color” was made from egg whites and yolks that had probably gone bad a decade ago.

Fresh “Spring Color” required special-ordering from Umbria, so we settled on a water-based paint. Since Germano and I work full-time, we had to find a painter. A friend of a friend introduced us to a Mr. Fontini, an elderly deaf man with a fluffy white handlebar mustache who lived in the beachside outskirts of Rome. Fontini spoke slowly and loudly and gestured extensively in an effort to help me, la straniera, understand the intentions of his next move. I reciprocated. It was the foreign woman and deaf man show.

“I-will-paint-this-wall,” he gesticulated, his hands waved up and down, imitating painting.

“Okay-good.” I’d give him the thumbs up to show I understood.

Fontini mixed the water-based paint himself, adding drops of ochre to the white until he found the right tint. We thought this was very artistic and clever. It helped explain the Renaissance.

Architects and other characters After getting settled, we dined in the 60-square-meter doppio salone, or dining room, which once housed a De Padova table (one of the items in the failed kitchen deal). We found the same table at De Rossi, saving €400.

But dinner in a bare doppio salone — table and chairs but nothing else — seemed a little odd. We’d sit around imagining life in the signora‘s heyday:

From the distant kitchen, a servant would stride over the hardwood floors and scurry back to the pots and pans to stay out of sight. The maid would then kneel down to scrub the floors, the fringe of her white apron sullied by the soapy water.

Since a maid wasn’t in our budget, we decided to move the kitchen closer to us. We’d make it part of the large salone. The original kitchen could be transformed into a study or guest room.

Since the great Mr. Fuksas (he who didn’t design the apartment) wasn’t around to help us, we hunted for a Fuksas clone.

“It looks like you live in Philippe Starck’s house,” said the first “visiting” architect, another friend of a friend, referring to the French New Style designer. He recommended we build a small wall near the foyer so that the new kitchen wouldn’t be immediately evident. It sounded easy enough, but we decided to get a second opinion.

The second architect toured our apartment and asked us to email her the room measurements. We did, and never heard from her again.

The third architect objected to our high ceilings. Lower them in the hallways, entryways, and bathrooms, she said.

But what about the kitchen? “Sure, lower the ceilings there, too.”

When she left, Germano came up the idea of installing a sliding glass doors between kitchen and dining room.

Going through with the idea meant repainting some of Fontini’s walls. But what was Fontini’s secret formula? How many drops of ochre to white? Was it ochre or yellow? White or cream? We didn’t know. We thought of calling him before remembering that he was deaf. Germano repainted the room. It didn’t quite match.

For the doors, we needed experts. Paolo, the door store expert, arrived wearing a leather motorcycle jacket and carried a laser tape measure. He scribbled measurements with a pencil stub, never removing his jacket, and left faster than a Harley. When the crystal doors arrived five months later, the measurements were off — Superman Paolo had forgotten to calculate the wavy moldings, leaving a five centimeter gap when the doors closed.

The glass is always greener Meanwhile, we tackled smaller projects. A hallway niche where the telephone was located was dark and dingy, so Germano asked a vetraio to measure it for a glass shelf. When the glass arrived, it was aquamarine green.

“Glass is always green,” the vetraio explained laconically, “unless you want it clear, and that costs more and is only slightly green.”

We paid the extra fee to get clear glass.

“By the way,” he said, pointing to the empty space where the kitchen sliding doors would be, “your doors will also be green.” Germano extended his index finger and pinkie: le corne, the sign of horns to ward off bad luck. It worked. No green.

Germano, a talented cook, bought both a professional steam oven and a stainless steel dishwasher. His parents donated a cobalt-blue refrigerator.

Tales from the closet We needed a closet, and picked a cream-colored one with, you guessed it…

“Sliding doors are in,” explained master-installer Germano. What we didn’t calculate was that of the closet’s three sliding doors only one would open at once. Getting dressed in the morning became a comedy routine.

“Germano could you please close your door, I need a shirt.”

“Okay, when you’re finished, I’ll get a skirt.”

Mrs. Antonella Our elderly neighbor Antonella frequently rings our doorbell, bearing meals and checking on our progress. After handing over a portion of her spaghetti alle telline (clams and white sauce), she toured our bedrooms.

“Your beds should be facing north,” she announced. “Your inner compass needs to be adjusted during the night.”

“But Antonella,” we explained, “our sliding door closet only fits north.”

She suggested we move the closet into the living room. “Might not be the prettiest solution, but at least your compass will be on straight.”

One weekday, Antonella arrived bearing a pizza margherita. “You eat so early,” she scolded when she saw our cleared dishes. That was the prelude to more suggestions. Why didn’t we turn the couch so that it face the kitchen, not the garden.

She probably knew how to fix sliding doors using compass headings, but we didn’t ask.