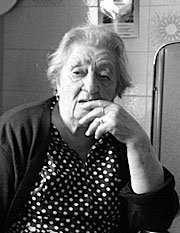 oday in the car, I turned left from a busy street into one that was narrow and one-way. Coming the other way was a grey Peugeot with two “older” women — nonne — in it. The driver peered over the steering wheel and made frantic gestures suggesting I turn back. Sure of myself, but knowing that Italians can change street directions without informing the public, I checked. The white arrow sided with my car. I pointed to it. More gestures.

It was hot and I had no intention of leaving the air-conditioned car. Eventually the nonna came over to tell me I was going the wrong way. I pointed politely at the sign. She looked at it dumbfounded. “Well back up,” she said.

“But it would be easier,” she said.

“No,” I said, “there are now several people behind me.” Indeed, the line of honking cars extended into the busy street I had just left.

“Fake what?” I wanted to ask. “That I am wrong? That no one is behind me? That I can just back into two lanes of irritated Italian traffic?”

She returned huffily to her car and backed up, barely missing a parked car and a pedestrian. The pedestrian started shouting and the nonna raised her hands in that Italian gesture of wishful disassociation from fate. She got out and after a few words, the pedestrian was backing her car into a driveway, letting us all pass.

The previous day in the bank, I had just reached the teller when a nonna stepped in front of me waving a €50 note.

She stuck her head between me and the window. “Would you change this?” she asked the teller. The teller ignored her. (I’ve learned that ignoring clients is in the teller’s job description.) She tried again. The teller didn’t flinch.

“I want to change this,” she said, finally acknowledging me.

“Can she change this? It will only take a minute.” The nonna insisted.

“I’m not the one to ask,” I answered. “But if you would like to change it, perhaps it would help if you asked to cut in front of me.” I smiled sweetly and she retreated to the velvet rope.

You all know her. You can’t tell her age. You might guess 80 only to see her 30 years later, unchanged. No matter how short you are, she is shorter. She usually has an interesting dermatologic specimen on her face, generally sprouting a central hair. She wears a wool coat with a brooch on the collar. Or she staggers under a mink coat that weighs more than she does. Her many sweaters are in the saddest tints of already sad mustard or green.

Ever wonder how those mercerie with fluorescent lights and little drawers of unexposed merchandise survive? The Nonna. In summer she wears more layers than what I ski in. Her support stockings could hold up a skyscraper. Her shoes have sturdy heels and she has tiny feet. (Did they bind them?) She will talk to anyone, anyone, so long as the topic is her malanni, her perfidious daughter-in-law, and how inadequately your children are dressed. International police forces should employ her; she could make the Son of Sam feel guilty and repent. You think you’ve got problems? Hers are always worse.

The nonna is actually a complex and paradoxical figure. Six days a week she’ll complain of solitude. On the seventh, she’ll lament the large family she has to cook for. Always on the verge of death, her symptoms baffle Italy’s finest physicians. The symptoms never get worse and she will die (at an advanced age) of something else. Too weak to get her shopping trolley up a curb, she can flatten the grown man who stands between her and the alimentari counter. Life may be suffering and submission, but her sense of entitlement is limitless.

The nonna is also a creature of mystery. For years I’ve sought the tipping point, the missing link between the cute, firm-fleshed girl she must once have been and the twilight phase. What’s the intermediate state between the hoards of cute Italian girls and the hoards of nonne? At what age do you start pretending that numbered tickets at the anagrafe don’t apply to you? When does the default mode for all speech become querulous? Is there a magic, transformational moment when the girl with her exposed belly button becomes aware she could prendere freddo and dons a shapeless wool coat for eternity?

Maybe I’ll never find out, but then nothing matters finche c’è la salute.