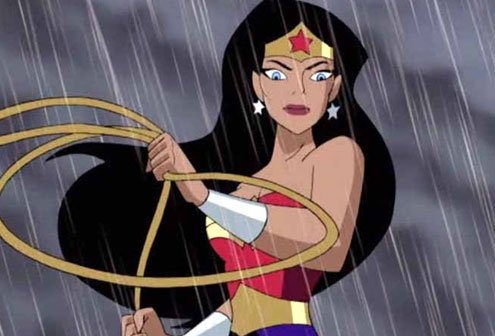 Wonder Woman, Conan, it's all the same if you're a female kickboxer.
I

t was bound to happen. After eating my way through Italy for six months without regard for my waistline, my pants began to feel a little tight. So, I began attending cardio boxing classes at an Italian gym in my Naples neighborhood.

Quickly, I learned that Italian ideas of fitness and healthy eating differ significantly from American ones.

My first two days of kickboxing class, the instructor handed out pastries (day 1) and Baci chocolate truffles (day 2) right before our workout. In years of gym-going in America, I’d never seen this before. I was the only one in my Italian workout class to refuse. People looked at me like I was nuts.

Then there were the workouts. While the American status quo is not to show weakness while struggling (especially for men), in Italian workout classes it is apparently normal for men to moan and groan as they complete exercises. (I don’t mean grunt — I mean whimper and moan.) It is also commonplace for men to pull up their shirts and stare at their stomachs in the mirror as they do crunches. Weird.

While I’m by no means overweight, I certainly don’t consider myself at the pinnacle of fitness. In America I’m just another person huffing and puffing through a workout class.

But in Italy, apparently I’m a beast.

Let me illustrate: our kickboxing workouts consist of two people hitting opposite sides of punching bags that sit on the floor, weighted down with sand.

From the get-go, my punches and kicks pushed the mobile punching bags across the gym floor, shoving the Italian women I was paired with toward the gym wall. Their blows weren’t strong enough to counter mine and keep the bags in place. (That’s not surprising — most of them are four inches shorter than me and roughly half my size.)

Eventually, my instructor started ordering me to share punching bags with men. Yet I still sent the bags flying across the room, even when paired with macho-looking Italian males. The men turned to each other, murmuring their disbelief.

Quickly the Italian men’s pride got the best of them and they just stopped sharing punching bags with me. I now punch my own bag da sola, and everyone seems happier with this arrangement.

But how is it possible that a girl like me, who bench-presses about 20 pounds, can outpunch Italian men full of machismo? I don’t get it.

Admittedly, I run a lot — a habit that doesn’t seem as popular among Italians. It’s uncommon enough that old men stop and cheer me on like I’m some sort of Olympic athlete, chanting things like, “Forza, forza, e non mollare mai!” (“Go, go, and never give up!”)

I don’t think that explains why I come off as Conan the Barbarian in kickboxing class, however. Rather, there seems to be a fundamental difference in how Italians and Americans approach fitness and diet. Italians don’t seem to feel the need to work out as hard, or restrict what they eat as much. And apparently it works for them, judging by how few obese people I see here (though according to statistics, the number is growing fast.)

Some Italians have tried to explain to me their logic, arguing that someone young and healthy like me doesn’t need to go to the gym. “Just walk,” say extremely slender Italian men in perfectly tailored slacks (usually while eating a gelato cone).

Other times, when I’ve opted out of getting the aforementioned gelato, trim Italians have donned a bemused, concerned expression and told me, “You know, gelato doesn’t make you fat.”

Maybe not. Neither does Neapolitan pizza. But shoving your face with an ungodly amount of pizza and gelato, as I did when I arrived in Naples last year, might.

As far as exercise goes, Italians are probably right that it is better to walk an hour or two per day than run hard on a treadmill three or four days per week. And eating a pastry isn’t going to kill you.

Still, I have trouble with these principles of moderation. Maybe it’s the American in me but I have to either commit to running daily and eating brown rice and lean chicken, or dive face-first into a world of gelato, pastries and pasta. It’s hard for me to do anything in-between.

Glancing around at neighboring tables at restaurants, there is clearly some secret that explains how 100-pound women can devour several plates of antipasti and then proceed to eat a three course meal without their stomach exploding.

I’m working on figuring that out. Until then, you’ll find me running through my neighborhood on weekends, and refusing pastries at gym class.