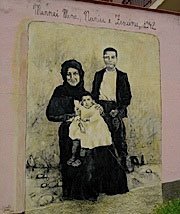 Hand-painted "murales" adorning the streets of many villages are poignant reminders of working class sentiment.
I

hadn’t planned on incorporating a vibrating refrain of “Another One Bites the Dust” into my lesson on past participles, but it did provide a laugh for all. However, by the third rendition of “Everybody Was Kung-Fu Fighting,” I could sense that everybody else in my pre-intermediate English class was ready to go karate on Luca’s Nokia.

Since no one where I teach in Cagliari had briefed me on the school’s policy for putting cell phones in detention, I agreed that Luca could park his three Fiat-sized mobiles on my desk, so long as they weren’t a distraction. After exchanging goodbyes with the other students after class, I was a bit puzzled when Luca met my outstretched hand with an apology and a lunch invitation. He explained that he had recently been elected mayor of his village and the town was organizing a feast in his honor. He insisted I come as his guest. I accepted his apology, and his invitation, provided he change his ring tones first.

The mayor’s Smart Car rolls to a halt outside of my apartment the day of the feast. His license plate is flanked by two stickers of the island’s flag with “Socialismu” — socialism in Sardinian. The two-hour route north weaves through the low-lying valleys of the Campidano before morphing into the rugged patchwork of mountains characterizing the province of Nuoro — the island’s most culturally insular region, and its most politically rebellious.

We shift from grammar to government. Luca probes my opinions on the Iraq war and George W. Bush, while I ask him about the road signs sprayed with bullets and the “Sardinya non est Italia” tags. Our ethos couldn’t be farther apart: One of us is from Washington, D.C., a city integrally linked with law, the other from the Barbagia, an area historically associated with banditry. But we find common ground.

Sardinia is to Italy’s political left what Emilia-Romagna is to the right. The island that furnished some of Italy’s most radical thinkers — including Antonio Gramsci and Emilio Lussu — is a liberal thorn in Rome’s staid side. Like north Italy, it has its own militant secessionist party, the Partito Sardo d’Azione. A history bereft of self-government has embittered Sardinians and developed into an intrinsic sense of injustice. For Luca, Rome is a locus for remote and biased rulers.

Broken promises haven’t helped. Since World War II, various Italian governments pledged but failed to lift the island from poverty, their plans undone by corruption and poor execution. Sardinian industry, already alienated, grew stagnant. When coal mines opened in the Mussolini era were were shut down abruptly in the 1970s, a quarter of the country was jobless. Today, the southwestern Sardinia is littered with ghost towns.

Extreme poverty grips mountain hamlets in the island’s center and generates a sort of community-minded socialism based as much on the realities of subsistence as rebellion. Hand-painted murales adorning the streets of many villages are poignant reminders of the prevailing sentiment. Born from unhappiness among disenfranchised workers, the murals often portray Marxist-style miners strikes. It’s colorful rage directed at Rome’s profiteers and the assorted abuses of capitalism.

Two days before the feast, those with “extra animals” were asked to donate them to feed the community. In all, Luca explains that 22 sheep and a dozen rabbits were slaughtered — more than enough to feed the expected crowd, and any other English teachers who might show up.

We climb to the top of a plateau where a handful of stucco houses lie huddled together as protection against the fierce maestrale wind. Head nods and pointed fingers indicate where Luca was born, where he learned to ride a horse, and where his mother died.

The feast takes place in the wooded foothills of a mountain outside the village. Picnic tables are set among cork trees and a surging waterfall nearly drowns out the resonance of elderly men singing in Sardinian. Roughly 400 of the town’s 900 people are spread throughout the woods. Women gather near a mountain stream: some submerge Ichnusa beer, many cool fill’e ferru grappa. Men congregate around an open-pit fire: Some rotate the spitting rotisserie, many instruct those rotating it. The villagers seem to already know who I am as I am absorbed into a whirlwind offering of lamb and liquor.

Following the feast, Luca is coaxed into a traditional Sardinian ballo. As he drops me off back in Cagliari, I thank him before showing him the pictures I snapped of him dancing barefoot while balancing a glass of wine on his head. He has since agreed to keep his three Nokias on silent.