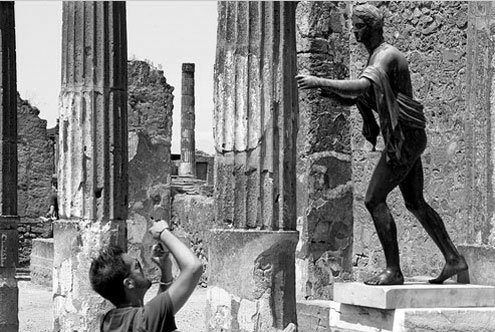 In Pompeii and on the Amalfi Coast, Italian decency can go out the window.
B

elieve it or not, Italy is not as dysfunctional and patience-testing as you have been led to believe. Things often work normally, even smoothly. In fact, I find southern Italians amazingly helpful for no good reason. Take the stranger who spends five minutes of his time helping me retrieve a trapped metro ticket from a broken turnstile machine or the elderly lady who feeds me a piece of pastry off her fork just because she wants me to try it.

All that changes when you step into Italy Disneyland.

That’s my term for heavily-trodden tourist destinations like Pompeii, Sorrento, Positano and even parts of Rome, which between June and September turn into a revolving door of foreign travelers and annoyed Italian workers. In Italy Disneyland, normal Italy rules stop and those of tourist Italy begin.

I recently got a big taste of this while showing around four friends from the United States.

The first offense came when we sat down at a bar on the beach in Positano and three different waiters pestered us to order food at 11 a.m. I live in Naples and can’t even get food until 1:30 p.m., so I was surprised to even hear the query, “spaghetti?” at that ungodly hour.

We just wanted coffee and drinks, I told the waiters.

Apparently during tourist season, this is not allowed — especially if your group is fair-skinned and blue-eyed. Aside from the waiters who pushed bruschetta on us and then inexplicably vanished when we said we wanted espresso, we sat unattended for 25 minutes. One waiter took one of our chairs but didn’t stick around to take our drink order. Meanwhile, nearby Italians were freely enjoying coffee and Prosecco in the half-empty bar.

Coming from Naples, the land of overly attentive café waiters who wear tuxedos for no apparent reason, the treatment floored me. We got up and left.

Fast-forward to Pompeii a few days later. I decided to drop my guests off around lunchtime at the ancient Roman city and pick them up after work. I figured I could hook them up with a guided tour on the spot, since the last several times I’ve gone to the archeological site I’ve had to shoo away hordes of tour guides trying to sweep me into their group.

That’s when I started to get mad. Non è normale (This isn’t right), I told a particularly useless turnstile worker.

He then proceeded to do the hand gesture that I hate, the one that says, “Relax, calm down, it will be okay.”

“You just need to…,” he said, trailing off and patting the air as if calming a wild animal.

No, I told him, I need to get my relatives on a tour and get back to work. “We are all at work,” he said. At work, maybe, I thought. Working, no.

As I started going off on the worker in Italian, one of my guests saw a tour group gathered about 10 feet behind him. And there was Fabio, smiling and inviting my two guests to join his tour. Surely he’d passed by the unhelpful turnstile worker during some portion of the runaround.

I left my guests with Fabio and laughed off the absurdity as I made my way back to my car.

Oh no, I thought. The lazy turnstile worker has them fooled.

“That’s not Italy,” I told them. “That was just ridiculous. There’s a difference.”

I don’t think they believed me.

Five minutes later, I nearly caused an international incident trying to get my car out of the parking garage where I’d left it 30 minutes earlier, all because I’d accidentally tucked my ticket into the Pompeii guidebook I left with my guests.

The same man who parked my car a half-hour earlier claimed he didn’t recognize me, even though I was probably the only blonde, blue-eyed girl in Pompeii speaking rapid-fire Italian and driving a Toyota Yaris like a banshee. He couldn’t just let me take someone else’s car, he explained, ignoring that I was holding my Yaris keys in my hand.

This was clearly a scam. In Italy I can walk into an Italian restaurant that I only visited once before, and the employees will remember me six months later. It’s a special Italian gift. In fact, I don’t think I’ve ever had to produce a parking ticket to retrieve my car in Italy — the workers just know which one is mine.

Still, Mr. Pompeii wanted me to pay for six hours of parking. One, al massimo, I replied, and then told his friends that he need to see a doctor for his memory issues.

One hour it was, and I drove away.

As I wove in and out of lanes of traffic on the autostrada, I felt lucky to live in Naples, as far away from Italy Disneyland as you can get.

If visitors think that the real Italy is anything like what I experienced last month, I wonder why they ever come back.