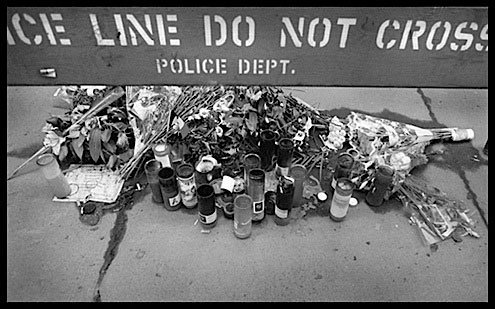 What if some guy shot the pope...
N

olan Carl’s call came the night Jerry Brown had talked for hours. A presidential contender chatting up journalists in the intimacy of a columnist’s living room on the night before New Year’s.

But what if it’s not about numbers, I asked? What if it it’s about motive and opportunity? What if rage needs a stage? Never mind, said Jerry Brown. Same difference.

The call came after I got home. My girlfriend handed me the phone. “Come now,” said the voice.

It was in Fairfax County, Virginia, a home by a lake in a district called Franconia. Nolan Carl escorted me to the slate-colored door just past a gas lamp on a post.

Nolan Carl spoke in self-fracturing sentences. He had a mouth that opened very wide, with very large teeth.

There was a middle-aged man at a kitchen table face-down on a formica top. The ooze from his wound was now black and absorbed by a stack of cocktail napkins that had also turned black. A portion of his skull lay on the floor. It looked like a small dead crab. The kitchen smelled of stale milk and applesauce. His left hand had nails that were bitten, like mine, to the quick.

Upstairs, on a ruffled bed with a checked quilt, lay the wife, partly undressed. She had a very small hole in her temple. The pillow was black like the cocktail napkins in the kitchen. There was a scarf on the bed table, and a busy little mechanical clock that let out a sonar ping each minute. A Christ figure with a “why me?” look hung above the clock and stared at a happy-faced stuffed tiger on a wicker chair. A standoff, I thought.

Nolan Carl said, “Too much? Want to leave?”

In the living room, the books were flush to the edges on five tiers: Faulkner, Kissinger, George Kennan, Tom Clancy, and a few titles in French. On one shelf, tucked in over a book titled “Hello, New Hampshire Terrier!”, was a baseball cap with a Detroit Tigers insignia. “Don’t touch. Not a thing,” said Nolan Carl. Two police photographers arrived.

“So you like my favor?” asked Nolan Carl. “You said you really wanted to. You know, see one. Here’s one.”

“Muder-sucide. He’s a diplomat. Killed her. Then himself. You know. Domestic. Maybe six hours ago.”

At the phone booth, 30 feet away from the badly-draped police tape, my girlfriend asked about dinner. No, I said. They didn’t make it. But you can smell it. A roast.

“Makes me sick,” said my girlfriend.

“That you wanted to go in.”

I had misunderstood the question.

The diplomat was once stationed in Nigeria, in Lagos; she was a professional librarian: Two sons, at Harvard and Brandeis. The newspaper editor said: “Can you get back in the house and get some family shots of the kids? Maybe from a yearbook.” The editor, who worked with the early edition, always sough family gathering scenes to help make death more credible.

I called. No, Nolan Carl told me. No one else enters the crime scene.

The kid from Brandeis arrived at the house in the morning. I approached him before the camera crews. “Please leave me alone,” he said.

He said: “My parents are dead,” and left in a Ford minivan.

Nolan Carl smoked Vantage cigarettes. He had a baby-face and Coke-bottle glasses. He’d been a Marine officer in Vietnam.

“Funny,” he said. “Guy was a diplomat. Guy wrote a book thing about some African peace mission where all the good guys had it all worked out with the bad guys — at least they thought they did — and then there was some kind of massacre. Pretty shitty. So you come back. Feel bad. Take it home. Go figure when the train’s going to derail.”

“Did you have any idea what happened?” I asked.

Nolan Carl said, “Champagne cork and a gun sound pretty much alike. Then after. That’s when you know. Or when you find out. Who knows much about the before?”

Jerry Brown talks about democracy. He is in Mary McGrory’s living room. He’s gaunt and self-important. He speaks with righteous conviction.

“Italy’s got the Red Brigades, right? Killers. No rule of law. That’s what we have to fix here. Crime is our terrorism. This is evident.”

Later, Nolan Carl called me at home. He woke my girlfriend, who cursed the clock. She had work at 6 a.m.

“Turns out a note. Huh, right. Stuff about futility. And I quote: You can’t fix anything on the broken planet. The guy’s own words. ‘Broken planet.’ Some of it is nonsensical. Wants his kids to remember. The good he’d tried to do is part of it. And that God was with him.”

Jerry Brown says America needs a president who understands the danger of unlicensed weapons. Jerry Brown says he’s made California safer. No terrorists there, he says. No Red or White Brigades. California is not like Europe where nowadays if you disagree you kidnap or kill someone. But there are solutions in America. In a few decades America will be largely non-violent. Jerry Brown is soon to become a presidential trivia question, but he doesn’t know it yet.

“Last thing,” said Nolan Carl. “Shot the dog. Dog and puppies. Shot them. Then himself. If you want the timing.”

I called the newspaper desk with his cryptic information.

“Maybe you should also say the dead guy was Catholic,” the editor said.

“Just a detail. People like that stuff. What if some guy shot the pope?”

Right, I said, and signed off.