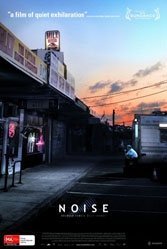 Matthew Saville’s psychological thriller fails to capitalize on a moody opening. An aloof young woman named Lavinia (Maia Thomas) stumbles onto a Melbourne subway train immediately after a massacre. Quizzed by police, she withdraws into a moody, protective shell, mumbling about a lost painting. Is she involved? At the same time, tinnitus-afflicted beat cop Constable Graham McGahan (Brendan Cowell) is reluctantly roped into an investigation that’s seemingly linked to the subway attacks. Or is it?

At this juncture, Saville has two choices: Link the themes and ramp up the tension or edge instead toward the Australian occult, as Peter Weir did often in the 1970s. The tossing in of paraplegic boy would seem to favor the latter, but it’s a red herring. The thrill in thriller is for naught.

Instead, noise-nagged McGahan is portrayed for what he is, an empathetic but uneasily shy man who relates difficultly with others and feels the walls of his impairment closing in. Witness Lavinia hangs around the periphery of the mystery but fails to deepen it. The pace gradually bogs down — focusing on the menacing yin-yang between McGahan and the hostile local community. Though Saville sets out to make an indie-style movie about how randomness is kin to the intertwined, his plodding method fails to satisfy a haunting preamble.