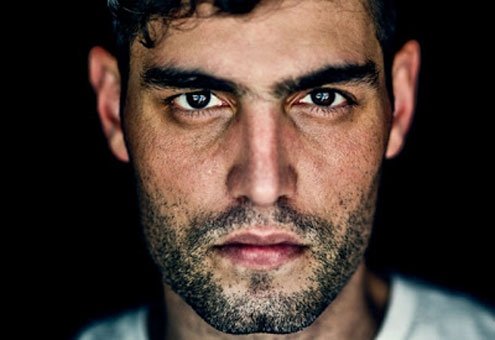 he best, most effective stories should be told in one sentence.” Josh Martin has been quoted extensively in the last year or so, but it’s this line from a Philadelphia Weekly article last year that most befits his oeuvre as one-man country noir act Daughn Gibson.

It’s no surprise he’s once again mastered the art of short stories on his new album, Me Moan (Sub Pop). The 32-year-old Carlisle, Pennsylvania native has a colorful background from which to draw. Drumming for local stoner-rock trio Pearls and Brass for the better part of the 2000s, Martin paid to play by working odd jobs in between tours. The most colorful (and frequently mentioned) among them was manning the counter of an adult bookstore and long-haul trucking.

When Pearls and Brass went on hiatus in 2008, Martin went back to school. He found that time away from his local scene was just the thing to kickstart a solo venture. Those bedroom recordings were never intended for public consumption, but it’s a good thing old friend (and White Denim record label head Matt Korvette) heard them and pushed for more — otherwise we never would have gotten 2012’s alluringly understated debut, All Hell.

The better news is that Martin retains much of that same opaque charisma on his sophomore full-length despite the addition of a backing band in some places. The Daughn Gibson formula relies on simple bass line loops, rudimentary drumbeats, a limited range of dusty guitar tones, and Martin’s borderline-insincere baritone. As such, Me Moan is like All Hell in that it’s a simple album at face value: Take homespun electronics and combine them with a guy mining the depths of his own blue collar country stories in the vocal territory of Elvis or Waylon Jennings.

But the real success in these songs is Martin’s songcraft. You can try to make music matching the above description (and I bet plenty will once they hear Me Moan), but making it in a way that’s both memorable and convincing is difficult without sounding like a novelty. Martin plays with fire as Daughn Gibson, but his knack for a phrase that hooks or a line that lingers with you as a listener is beyond any contemporary.

Last year, All Hell featured the female vocal accompaniment (“In the Beginning”), stutter (“Tiffany Lou”), and the story behind “Ray.” Me Moan has just as many highlights: There’s the drawn-out drawl of “It takes me a long, long while” on “You Don’t Fade,” the chorus of “Won’t You Climb,” and the tender delivery of “All My Days Off.”

The music is top notch, too. The rushed drum beat and crashing cymbal of opener “The Sound of Law” would seem to set the tone for “bigger” sounding album, remote from All Hell’s darkness. But if you scramble the tracklisting of both albums, it makes less of a difference — they all seem to fit no matter the order. “The Sound of Law” sidles up to the guitar slides of “Phantom Rider.” There’s the bagpipe of “Mad Ocean” and the almost lounge-like flourishes of “Won’t You Climb.” The closer, “Into the Sea,” feels noticeably light in its airy ambiance.

Special mention should be given to “The Pisgee Nest,” a modest tale of breaking into cars with a state trooper’s daughter. The stark drum and bass form the backbone of a song that’s all unknowable anxiety in its blinking slide guitar and Martin’s descending chorus. “Someone shout it out / You can bring it back anytime,” he sings distantly. It will stay with you long after its four minutes are over.

Daughn Gibson and Me Moan certainly won’t grab the attention of the music world in the way that Kanye West or even Boards of Canada have recently, but that’s part of his appeal — even on a high profile label like Sub Pop, you have to find this music rather than the other way around. And once you’ve made it that far, the story really begins.