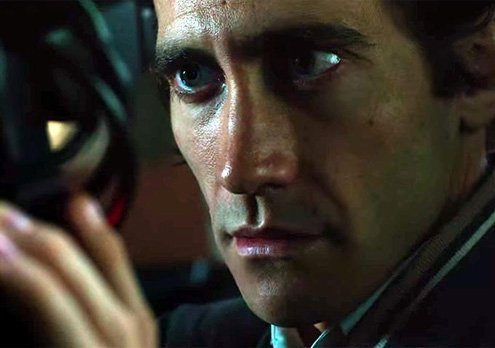 Jake Gyllenhaal slips into the Jared Leto-Heath Ledger mode.
I

ntroducing Lou Bloom (Jake Gyllenhaal), a robotic, socially maladroit hustler (and thief) who sees a “next level” opportunity in peddling carnage footage (car crashes, murders, fires, et al) to highly competitive L.A. TV stations whose “news” ethics are dubious at best. A cheerful sociopath (“I set high goals and I’ve been told that I’m persistent…”), he goes about his newly discovered business with ludicrous abandon and deadpan or grinning zeal, his soul clearly off kilter. He’s self-taught, absorbs marketing bromides the way a dog collects fleas (“Why you pursue something is as important as what you pursue…”), and sees himself as bluffing and negotiating his way to the top of the business food chain.

But gifted first-time writer-director Dan Gilroy, a Californian and the brother of Tony Gilroy (“Michael Clayton”), has entered into something of a Faustian bargain. Leaning on soiled character studies means sticking to type, if not working hard to one-up that type’s perversions, which Gilroy does to the breaking point and beyond. Gyllenhaal’s Bloom — built around the haunted and wide-eyed Jared Leto-Heath Ledger template — is a literalist to the point of capitalist parody, his lurid unscrupulousness a macabre-comic tool used to illustrate Internet derangement, media cold-heartedness and old-fashioned American greed. But once you create a thoroughly amoral character and make him the center of attention the only step left is to ramp up that amorality into something even more primordial.

That’s of course what happens here. Suspense is suspended since Bloom’s quirky madness is also his belief system. Start to finish, he’s a self-made, “Let’s Make a Deal” sliver of fouled Americana, a kind of human Wikipedia spew isolated from compunction and therefore a perfect fit for faltering TV news producer Nina (Renee Russo, Gilmore’s wife). She is a caricatured lover of voyeurism eager to hype a theme — “Urban Crime Creeps Into the Suburbs” — and willing to turn to anyone who’ll fulfill her ratings prophesy. She also the object of Bloom’s “flirtationship,” one of many words and mottos cribbed from online gibberish. “My motto,” says Bloom, “is if you want to win the lottery you’ve got to make money to get a ticket.” Gilmore’s motto — and maybe that of all so-called neo-noir filmmaking — is that it takes all kinds, and they all deserve their 15 minutes.

The perversion and the parody are both capably handled, but the whole is rotten enough to place any cinematic gratification in the back seat and keep it there.