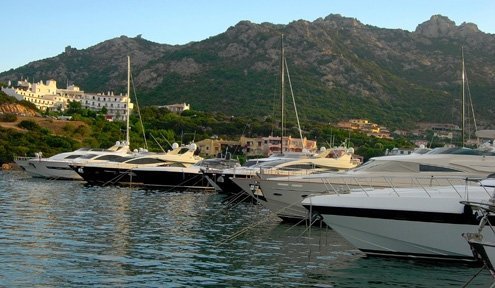 Porto Nuovo provides opulence at a price. All photos by Eliot Stein.
I

pulled off of Porto Rotondo’s palm-lined main drag beside a small wooden shed where the word “Pro-Loco” (a welcoming committee and tourist board) was dwarfed by signs advertising the resort’s private helicopter landing pad nearby. The pro loco’s founder, president, and only member listened as I explained that I needed to research the area’s history for a Sardinian guidebook I was writing. She cut me off in mid-sentence, made a phone call, and then gave me a once-over: “You should talk to the Count. He will see you at 16:30. Maybe change your clothes.”

At first glance Sardinia’s northeastern corner is an unlikely place for some of the Mediterranean’s most exclusive luxury resorts — among them the Costa Smeralda and neighboring Porto Rotondo. The landscape is harsh and marked by massive windswept granite boulders sprinkled around deep fjords.

Malaria flourished until the 1950s when the Rockefeller Foundation recruited 30,000 Americans to spray 10,000 tons of DDT on the coastal swamps to make the region’s turquoise beaches healthy, bikini-friendly and ready for two Venetian Counts with fairytale surnames (Luigi and Nicolo Donà delle Rose, roughly, “Gift From the Roses”) to dream up a jet-setters’ paradise for their aristocratic friends.

Just why Luigi wanted to talk to me, a 24-year-old with pomodoro stains on his shorts from the previous night’s dinner at the modest agriturismo, mystified me. But since it’s not every day that a Venetian count invites me to hobnob at a café, I quickly changed my clothes, shaved in the parked Smart Car I’d borrowed from my roommate, and walked to Porto Rotondo’s central meeting place, fittingly called Piazza San Marco.

Count Luigi sat alone at an outdoor table conducting business on his Palm Pilot. We shook hands and I sensed a moment of mutual disappointment: for him, it probably had something to do with my passé get-up; for me, it was that he was wearing a polo with the crest of the resort’s yacht club instead of a cape.

“What do you drink?” the Count asked as we both sat down. “Double whiskey?”

“I’m kidding, of course,” replied the Count. “We Italians are liars. That’s why I wanted to speak to you. Anglo-Saxons are decent people and do things truthfully. If you’re going to write a book, you need to know the truth, so listen…”

I did listen, and during the next hour the Count described how he and his brother turned 15 kilometers of coastline blanketed by nothing but green macchia into Italy’s most expensive address.

It began when the count, then my age, and his brother sailed their yacht from Tuscany to Sardinia in 1959 on an underwater spear-gun expedition. They fell in love with the northeastern region’s ravishing beaches and unspoiled look and decided to build a port with a few luxury villas for their friends. A year after, Prince Karim Aga Khan began developing what would become the Costa Smeralda just up the road. In 1964, the brothers returned to Sardinia with two suitcases full of lire, displaced some sheep and their struggling owners, and got to work.

In fairness, the Costa Smeralda and Porto Rotondo tasteful, environmentally-friendly, and completely out of place in Sardinia. They are glitzy getaways on a traditionally rustic island where a one-night hotel stay runs the average Sardinian’s monthly salary. Their “Persia-meets-Capri” architecture hardly resembles the area’s stazzu ranch-style houses, and the whole coast is a virtual theme park with no bougainvillea out of place. But therein lies its whole appeal: just as Orlando has more visitors hoping for a glimpse of Mickey Mouse than it does actual cartoon characters, Porto Rotondo and Costa Smeralda are full of day-trippers eager to snap a photo of the odd soccer god or runway model.

In fact, despite the Costa Smeralda and Porto Rotondo’s “luxury” label, the resorts have outgrown their “exclusiv”” aura — a trend that was well-developed in a New York Times article three days before I sat down with the Count.

“Sure, the villas are exclusive,” he said. “That’s status. The whole area’s changing. You don’t have to be a millionaire to enjoy Porto Rotondo — to stay here, maybe. All our beaches are free, and there are two-star hotels being built nearby. This is a resort for everyone.”

As the Count’s Palm Pilot went off again, he told me he had another appointment.

“Now you know the truth,” he said walking away. “Just don’t come near my villa, or I’ll put security on you. I’m kidding, of course.”