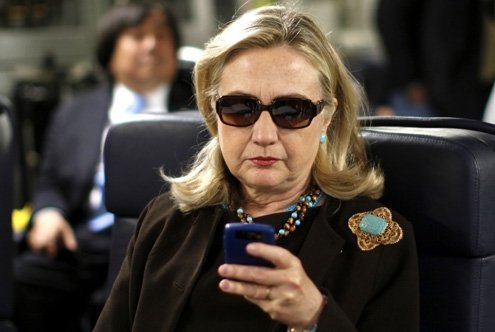 Hilary Clinton apparently set aside worries about the "appearance of impropriety."
J

ohn Proctor, the Massachusetts farmer and tavern keeper in Arthur Miller’s play “The Crucible” is a good man. Yet he has a secret — he’s cheated on his wife Elizabeth. Proctor confesses before the Salem court — it’s the witch trial era — but its judges have more than adultery on their minds. They’re seeking devil worshippers in their midst and they’ll stop at nothing to root them out.

A cowardly tailor turned court witness tells the judges that Proctor sometimes plowed his fields on Sunday, missing church — solid evidence of being a man of the devil. Later, he shows up at the Proctor farm in search of a “poppet,” a small sewn doll with pins. The doll has been planted as proof that Elizabeth is practicing witchcraft.

The Proctors are hanged (the play was written in America’s red-baiting era), momentarily satisfying the court’s insatiable lust for exorcism.

Yet Proctor broke his sacred marriage vows. His guilt and regret over his sin was punishment enough. Elizabeth knew she was somewhat to blame for her husband’s unfaithfulness and forgave him. But the appearance of wrongdoing falsely attributed to each of them nonetheless becomes couple’s downfall before the unforgiving law.

Hillary Clinton has called the use of her personal email server for U.S. State Department business a mistake.

Proctor did not make a mistake, he made a decision, and so did Clinton. Calling these decisions mistakes is a matter of hindsight.

But was her decision simply a forgivable error or one that rises to a punishable offense?

When Clinton assumed the office of secretary of state in 2009 there was most probably a moment when it occurred to her that such email use might have an “appearance of impropriety.” Some background is in order.

Clinton is a trained lawyer. Since 1972, when the Watergate scandal broke, no one in the U.S. legal profession has been immune from the lessons of that era. President Richard Nixon and many senior officials involved in Watergate scandal were also lawyers. The incident severely damaged public perception of the legal profession and ushered in demands for federal regulation. To prevent that, the American Bar Association (ABA) revised its ethics code. The new Model Rules of Professional Conduct were approved in 1983. Though not laws in and of themselves, many individual states transformed them into law, in whole or in part.

Clinton graduated Yale Law School in 1973 and became a member in good standing of the bar of the State of Arkansas, which adopted its version of the model rules in 1984. The Arkansas Rules of Professional Conduct Article 13(A) states, “A lawyer owes a solemn duty to uphold the integrity and honor of the profession… [T]o accomplish those objectives, the lawyer must strive to avoid not only professional impropriety, but also the appearance of impropriety.”

These Arkansas laws governed Clinton’s professional conduct as a lawyer.

As secretary of state she was also a government employee, and in public service the stakes of putting the appearance of impropriety at risk are even higher. Public servants have a fiduciary responsibility to carry out their duties with accountability.

In the U.S., all public employees take an oath to uphold the Constitution. They must also meet requirements for financial and other personal disclosures specifically designed to eliminate conflicts of interest and promote transparency so that public confidence in democratic institutions is maintained. It’s also why the avoidance of impropriety can be more important than the impropriety itself.

In 1989, then-President George H.W. Bush issued Executive Order 12674, titled “Principles of Ethical Conduct for Government Officers and Employees.” It included the admonishment to “…avoid any actions creating the appearance that they are violating the law or the ethical standards promulgated pursuant to this order.”

Yet while strict laws exist to prevent the appearance of impropriety, punishment on these grounds as applied to lawyers, government employees and members of many other professions is often reserved for egregious offenses. That’s because some see the standard as vague and subjective, insisting the meaning of both “appearance” and “impropriety” can vary depending on perspective. Some scholars and judges have challenged the norm for just that reason.

When the ABA adopted its Model Rules it omitted the “appearance” standard. Some states, including Arkansas, included it.

Yet whether a law or a regulation, the appearance of impropriety governs public perception. Regarding the ABA’s decision to leave out the “appearance” standard, the Arkansas Supreme Court once noted that the omission alone didn’t matter. What did matter was the principle, which applied in any case since the meaning was “implicit” in the rules and embodied their spirit.

The U.S. House Select Committee on Benghazi and its many predecessors failed to find a “poppet” to prove that Clinton acted with hidden motives or other impropriety. But appearances do matter, and her use of a private email server and deletion of many emails has allowed a fog of uncertainty to drift over the entire matter. It is a pall that Clinton, as a successful lawyer and dedicated public servant, could have but did not avoid.