No way to treat an ally 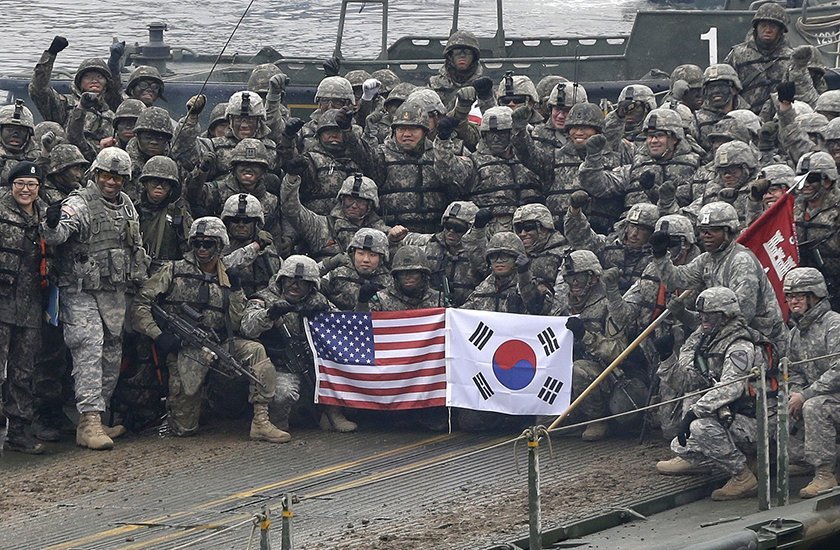 If an alliance means loyalty and support, the U.S. failed South Korea in a miserable way.
I

magine that you are a relatively prosperous western-style democracy with a strong economy and a bright future. Now imagine that you are walloped by the coronavirus outbreak, but that you respond fairly well, taking quick action to limit infections and fatalities. Your response is so good that other countries ask for assistance with their own outbreaks, including a strategic partner who is much bigger and more prosperous. You oblige, agreeing to send any medical supplies you can spare. Finally, imagine that this same partner, a treaty ally no less, then turns around and tries to extort billions of dollars from you. When you refuse, they throw thousands of your citizens off its payroll. Shocking, right? Would any country actually behave this way — kicking an ally in the teeth at the exact moment of global crisis?

Unfortunately, a country not only would behave this way, it did. And in the last few months, all this and more has transpired between the United States and South Korea.

On April 1, the U.S. military put approximately 4,000 locally-employed staff in South Korea on unpaid leave, even in the midst of the coronavirus pandemic, representing almost half of all South Koreans currently on the military’s payroll. The furlough was a direct result of the two sides failing to reach an agreement on the sharing of defense costs related to the presence of U.S. forces in the country.

On the surface, if two sides fail to reach an agreement, it may seem that both sides share equal blame for failing to come to resolution. But in this case, one side clearly shares more of the responsibility for driving the situation to its current impasse. And that one side is not South Korea.

U.S. troops have been stationed in South Korea since the signing of the armistice that ended the Korean War in 1953. The U.S. presence has fluctuated over the years, but for the last 15 years, it has remained in the general neighborhood of 25,000-35,000 troops. By agreement, the permanent force is currently capped at 28,500. This agreement for U.S. troops in the country, called a status of forces agreement, was first signed in 1966, building on the mutual defense treaty signed in 1953, which made the two countries treaty allies. Whatever one may think about the wisdom or necessity of stationing U.S. troops in South Korea, there is no doubt that both sides have welcomed this arrangement for almost 70 years now.

And for most of those 70 years, this arrangement has held up well, precluded major disagreements and irritation between the partners, and served to safeguard the national security needs of both countries. However, that all changed in 2017.

South Korea, understanding the benefits it reaps by hosting U.S. troops, began contributing monetarily for their presence in 1991, after rebuilding its economy and transitioning to democracy. In 2014, it signed a five-year deal to contribute about $830 million annually, or roughly 40 percent of the cost of the deployment. As negotiations ramped up for a follow-on deal, the United States increased its demand for payment. And in early 2019, South Korea agreed to pay approximately $100 million more. Unfortunately, this deal covered only a single year, forcing both sides back to the bargaining table by the end of 2019. And this is when things got ugly.

In the next round of negotiations, the United States upped the ante, demanding almost $5 billion dollars, a 400 percent increase over the previous agreement. Not only is such an increase shocking in its magnitude, but it would burst South Korea’s military budget, which came to a grand total of only $41 billion for 2019. This means that the United States was now demanding over 12 percent of South Korea’s entire military expenditure, a staggering sum for any country.

As can be imagined, the South Koreans balked at such an unfair and unprecedented demand. Although the negotiations have since been shrouded in secrecy, news reports indicated that South Korea offered to increase its payment by 13%, an offer that apparently offended the United States. If the United States saw any irony in being offended at the offer, it didn’t show it. And while the United States appears to have come down slightly from its initial demand, as of the last round of negotiations on March 20, the two sides remained far apart. Without any progress on a follow-on agreement, the existing one expired on March 31, and with it, the agreed funding for South Korean employees. The next day, they were furloughed.

This impasse has significantly damaged what has traditionally been a strong and rock-solid alliance. The United States has accused South Korea of “taking advantage” of the United States, while South Korea now perceives the United States as an entirely transactional partner with unreasonable demands. Officials are griping openly in public about each other, which is remarkable for treaty allies.

More importantly, the impasse is damaging military operations on the ground in South Korea. Gen. Robert Abrams, the commander of U.S. Forces Korea, warned the furlough will have “a negative impact on military operations readiness.” In addition, a Pentagon statement warned that it would need to “suspend many construction and logistics activities.” These are dangerous developments at a moment when the coronavirus epidemic and tensions with North Korea are both gaining steam. While this development may have been months in the making, preceding both the pandemic and the recent missile tests from the North, it is hard to imagine a worse time to suffer a major self-inflicted wound.

Beyond the impact on the alliance itself, this demand raises important questions about how the United States sees its own role evolving in the liberal world order that it built. The demand, if agreed, would turn the U.S. military into a moneymaking enterprise, which it has never been, nor should be. U.S. troops are not mercenaries, nor are they soldiers-for-hire. Their purpose is not to make a profit for the United States, but to safeguard the national security of the United States, as well as peace and democracy throughout the world.

Demanding an extra $4 billion from a strategic partner just because you can is unseemly and dishonorable.

It would be shocking if even one soldier were to say that she joined the military to help the United States make money. We deploy troops overseas to keep our allies safe and to ensure that we can respond quickly to regional skirmishes before they become global conflagrations. All of this activity builds alliances, prosperity, and goodwill, which in turn benefits the United States handsomely in tangible and intangible ways.

In a for-profit world, these ideals go out the window quickly. Imagine if the United States had demanded payment from Great Britain and France for coming to their defense in World War II. Even worse, imagine if a re-ascendant Russia, flush with petroleum cash, decides that it needs additional firepower and that paying for U.S. troops is better than building up its own military. One can imagine any number of scenarios that, while absurd, all of a sudden seem more plausible.

For a country like the United States, which has an annual military budget of almost $800 billion and just spent over $2 trillion to rescue an economy devastated by the coronavirus, demanding an extra $4 billion from a strategic partner just because you can is unseemly and dishonorable. And it’s a stark betrayal of the ideals that the United States normally fights for without fail.

Back in South Korea, General Abrams grew emotional when talking about the furloughs. “It’s unthinkable. It’s heartbreaking,” he lamented. “These are our employees, our co-workers, our teammates, and we consider them family.” When it comes to family, especially family that performs critical work to help safeguard your security, you shouldn’t quibble over a couple of billion dollars.