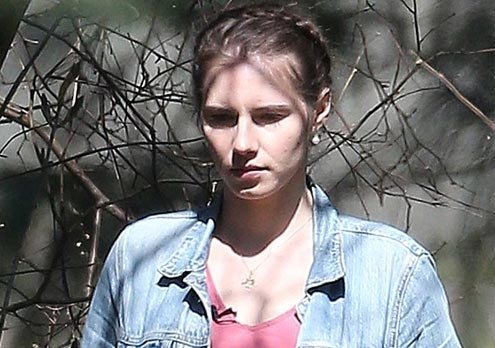 Knox in February 2013: Little chance she'll be ever be compelled to return to Italy.
M

Her acquittal on appeal was in turn appealed, overturned, a new trial was ordered, and Knox, five years later, is back at square one.

Under the Italian criminal justice system this is not double jeopardy but a continuation of the original trial. Legally, nothing is over except that Meredith Kercher is dead.

In the United States, the Fifth Amendment protects an individual from a second prosecution for the same offense after a trial level acquittal. Double jeopardy also exists under Article 649 of Italy’s Code of Criminal Procedure. But before an Italian verdict is considered final, it must be “irrevocable” — meaning no further appeals are possible. It can mean, as it has with Knox, that a case is heard at three court levels and then remanded by the highest court, beginning the cycle anew until the appeals process is fully exhausted. In criminal matters, murder included, prosecution starts with the Corte di Assise (trial court). The trial court in Perugia, the jurisdiction in which the murder took place, heard the case’s evidence and determined beyond a reasonable doubt that Knox was a killer. Central to the prosecution case was a finding by the court’s forensic expert that blood DNA on the blade of the knife thought to be the murder weapon matched Kercher’s blood.

The second court level is the Corte di Assise di Appello (appellate court). It may hear arguments regarding law and procedure as well as rule on the merits of the case, including substantive facts and evidence introduced at trial. The Perugia appellate court appointed its own forensic experts to examine the trial level DNA evidence, experts who unequivocally declared the blood DNA evidence was unreliable, citing bad collection and handling protocols that led to a likelihood of contamination. They also claimed that the testing methods applied in the first tests were unorthodox and speculative. This critical appellate testimony led the court to overturn the lower court conviction.

The third court level, the Corte Suprema di Cassazione (supreme court) threw the appellate court decision out the window. What we don’t know yet is why. The higher court cannot rule on a case’s merits. Its review powers cover three areas, whether the appellate court made a procedural error, erred in the application of law or, based on the evidence, its decision depended on flawed logic.

Regardless of the court’s underlying reasoning, it declared the appellate trial null and void and called for new hearings, this time to take place in the Florence appellate court. That court’s proceedings will be limited to addressing the specific motivations for the supreme court’s decision, once published.

More blood DNA evidence may be forthcoming. In earlier trials, forensic experts held diametrically opposing views regarding whether testing proved that Kercher’s DNA was on the blade of the alleged murder weapon. The appellate court blocked a final prosecution DNA test.

It is unlikely such a final test, if allowed, will yield a universally accepted truth, only enhance a probability. And even assuming compelling evidence emerges against the defendants based on a new test, on other new evidence, and on further legal arguments, the prosecution must still rid its case of the ghost of heavily criticized police procedures tied to the original evidence-collection process.

With the stakes raised, Knox (and co-defendant Raffaele Sollecito) will be in the crosshairs of a prosecutor eager to redeem what remains of a badly discredited judicial system, which American observers savaged.

It is those earlier failings that are likely to doom the prosecution, if not in the trial, then in the eyes of the U.S. government and courts of public opinion.

A conviction that becomes final on appeal would cause Italy to invoke the extradition treaty it has with the United States and demand that Knox be returned to serve her sentence. A refusal would result in an international arrest warrant that would effectively limit her movement to within the continental United States. Article 6 of the treaty would prevent the U.S. from raising double jeopardy as an argument against extradition, since Knox has not been tried in the U.S. for the same crime.

Still, a Fifth Amendment contest would lie in wait, one that might ask the U.S. Justice Department to weigh in and decide between the wording of the U.S. Constitution and the wording and demands of an extradition treaty. If that were to happen, Knox would never have to pack a bag.