No place left but up 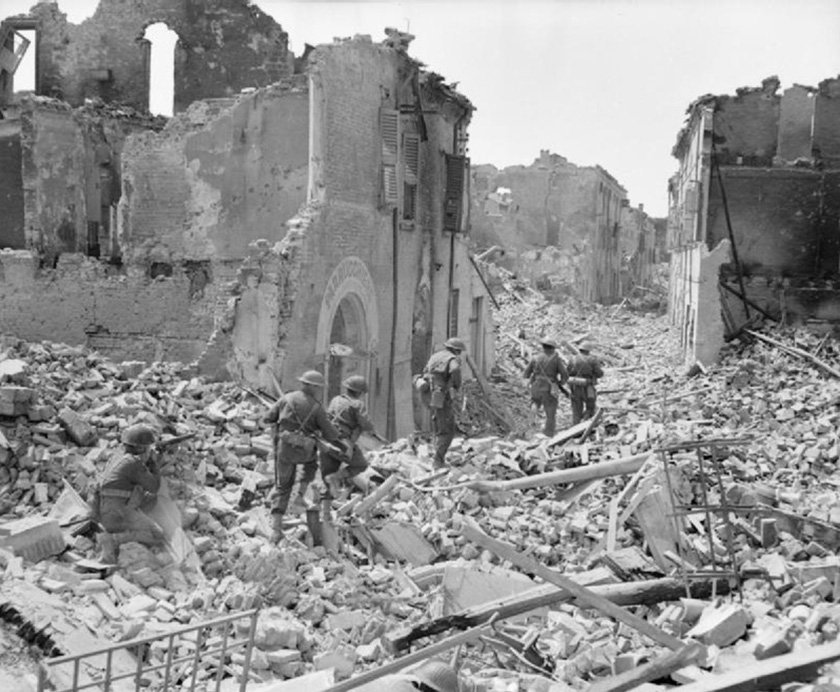 Italy was heavily bombed as the Allies moved north in 1943 and 44.
R

eading some of the international press coverage of the coronavirus pandemic, one can come across any number of diverging opinions. Some authors and columnists disagree with the virus containment measures taken by the Italian government. This is a curious fact since Prime Minister Giuseppe Conte and his ministries have adopted the very same decisions already taken by China and South Korea, where they seem to have been more than effective. In those countries, the spread of the virus has been largely curbed, though the human toll of the fight has been high. China quarantined the province of Hubei, which has some 60 million inhabitants, about the same population as Italy. All non-essential activities were stopped in January. Over two months, these strict restrictions have resulted in a gradual decrease in the number of people infected, reaching zero in recent days.

In Italy, the curbs on public movement, imposed nationwide on March 9, are starting to produce appreciable results — though the measures were taken with delay and reserve. It is far easier to impose restrictions in states where democratic freedoms are less a condition of social and political life, and despite its trading practices China is still under Communist Party rule.

In southern Italy, the virus made its appearance several weeks after hitting the north. By then, draconian measures were already in place, and so far the virus has not spread with northern speed and ferocity.

In Italy, the curbs on public movement, imposed nationwide on March 9, are starting to produce appreciable results.

Yet some critics complained that the Italian measures were too harsh and would devastate an already weak economy. That is certainly true, nor has China been spared. Its GDP is down more than 20 percent since January. Consumers are buying less and exports are predictably down. The same fate is likely to befall the Italian economy, and that of Europe as a whole. The United States and Russia are already suffering, and neither of them has yet to implement nationwide anti-virus restrictions. In the U.S., only a handful of states are under lockdown.

At this point it is important to remember we are not merely dealing with a “bad flu,” as some have labeled it. It’s a disease — often taking the form of extreme respiratory infections — against which there is no defense, at least not yet. Flu can, to some extent, be prevented through annual vaccines. And if it does strike, efficient drugs exist to stem the results. There is no such defense against COVID-19. During flu outbreaks, some 8,000 people die annually in Italy. In less than two months , COVID19-related deaths will soon top 12,000, about a third of the global total. Dependable sources suggest the overall number may be even higher because so many people dying of pneumonia are buried without autopsies. Lines of coffins await their turn at cemeteries and crematoriums. And medical staff is also dying. Do doctors and nurses die all over the country during a flu epidemic?

Yes, of course the global economy will suffer greatly. So what? People will be short of money, many will lose their jobs, at least temporarily, and hundreds of thousands, maybe even millions, will be forced to change their food and clothing habits. All sorts of sacrifices at all levels of life are in the offing. So what? Isn’t this what happens during every deep economic crisis?

Yet states, governments, and international agencies exist, many created at enormous expense, to act as buffers when such situations occur and attempt to stabilize the economic picture as speedily as possible. They exist to invest, and it is investment that restarts broken economies.

Germany is already planning to toss in hundreds of billions of euros, cash hoarded during decades of massive exports to European Union partners. Berlin never invested the surplus, generated by the demand for its own products, in fellow EU nations, as would have been logical in terms of macroeconomics, if not simple solidarity (it’s worth noting the German economy began to slump long before the virus crisis).

American President Donald Trump and Congress have passed an aid package worth trillions, and other national leaders are moving in the same direction. The EU is momentarily setting aside its once untouchable Stability Pact, allowing Italy and other economically feeble countries to spend all the money they need to recover from the devastating economic effects of the virus. The European Central Bank (ECB), headed by former IMF chief Christine Lagarde, will buy up national obligations worth hundreds of billions of euros, and partly resume the previously effective quantitative easing polices set in motion after the Greek crisis. There is also talk of the creation of a “Coronavirus Bond.”

Havoc will snarl markets and stocks will plummet further for a time… So what? That’s the market, baby…

Damaged economies will rebound. Havoc will snarl markets, stocks will plummet further, and assets will be lost. Again, so what? That’s the market, baby, a tool that has mixed emotion and risk since its creation. Collateral damage comes with each and every unexpected crisis. And economic collateral damage must be accepted. The alternative is another kind of collateral damage: several million dead souls, in essence the erasing of an entire generation of people over age 70. Is everybody ready to let go of their parents and grandparents?

Some insist the virus strikes only the elderly, who are already ailing. Not so. Some perfectly healthy people, some in the 20-to 40 age bracket, have contracted the disease and are dying.

During World War II both sides heavily bombed industrial and military targets. Many were located in densely populated areas. In Italy, Milan, Turin, Genoa, Palermo, Naples and many other locales were hit hard.

My father was in Naples at the headquarters of a cavalry regiment and told me of formations of American B-24 “Liberators” bombing the city daily. After each such bombing run, wide swathes of Naples ceased to exist. Only rubble and corpses remained where blocks of flats, monuments, churches, and schools had once stood.

The intense bombing was much the same in Germany, Britain, and throughout the continent. Did anyone worry about this collateral damage at the time? That was war, baby, another risky business. But all knew that once the storm ended, a healing and rebuilding process would begin. The economy would, in time, be mended, and people would marry and have children. Life would return to normal. Maybe not quite to the “normal” known before, since too much had been forcibly disrupted. In Italy, thanks to the toil of my father’s generation, and also to American assistance, cities and factories came back to life. New infrastructure was created — and all this in an atmosphere of democracy and freedom unknown to the generation born under Benito Mussolini’s interwar fascist rule.

Soon after came the Italian economic boom, the miracolo italiano, as it was labeled. I am a boomer born in that period.

Revival of all kinds will follow this viral tempest. But what you cannot revive are human beings.

I very much hope nothing will be as it was before this crisis. Tragedies of such a magnitude should teach lessons. We must become more aware of just how fragile we are, that as the poet John Donne wrote, “no man is an island entire to himself, every man is a piece of the continent, a part of the main; if a clod be washed away by the sea, Europe is the less…” Maybe the conoravirus will help us realize we have only this planet, a planet choking from human negligence. In that sense, the pandemic will have served a purpose.

For now, let us rejoice that our northern cities can again breathe clean air and that Venice’s waters are for once as limpid as they look in the works of Canaletto. Let us think about all these things après le deluge, knowing all will be well.