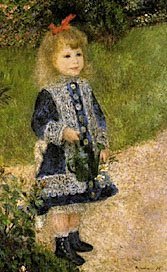 Watering, I caught his eye and waved. He waved back.
T

he American ethnomusicology student and the Italian pervert have something in common: acceptance.

But first the pervert.

When my husband Germano and I first moved to our rented Roman apartment in Monteverde two years ago, a previous renter told us sinister stories about the older man across the way, “My sister’s kids saw him walking around naked on his balcony.”

She was always careful not to greet him or to return any greetings he might extend.

I followed her lead. Discarding lemon rinds, carrot ends, and cucumber shavings on the terrace compost pile, I’d see him across the way tending to flowers on his balcony. He had a wife or a companion. I’d seen her face in the window but she seldom appeared on the terrace.

Like our wary, long-gone neighbor, I always avoided his gaze.

Then came William, a musicologist who studies in Naples and plays the trumpet.

I met him recently at a Sunday brunch for American students. He was tall with dirty-blond hair and sideburns that framed his face, making it oddly pleasing and derelict. His chest was strong, and I imagined him on stage high above the crowd, leading with his trumpet.

He pulled up a chair beside my friend Erika, humming bird to lilac. Their hair was the same color. Between sips of coffee, Erika inquired about Naples.

“Well,” William drawled, warming up, “I live in one of those case populare… whaddayacall it?”

“Yes, and it’s amazing. Everyone sits on their balcony and cries over to each other between the houses. They speak Neapolitan and sometimes you can’t even tell the sex of the name they’re calling… um, I can’t think of any examples now… um.” He looked at me inquiringly.

“Giova!” (Giovanni or Giovanna), “France!” (Francesco or Francesca) I chirped, happy to join in.

“Albe!” (Alberto or Alberta), William added, smiling. “And then they pull up the milk or meat they buy in a pail by a rope.”

Maybe I was wrong about the old man across the terrace. William had given me an idea.

Back at my apartment, apple peels in hand, I caught the pervert’s eye and waved. He waved back.

I turned to Germano, while washing off my sticky fingers. “You know, I think the guy across the way might be lonely. Maybe they don’t have kids.”

“Nah. He likes plants the way you do.”

That evening, as I was hanging the laundry to dry, Germano’s voice filtered in from the balcony. “I see we both like plants,” he was saying. An unfamiliar voice responded. They chatted about basil, rosemary and salvia, sage. Germano said that he wanted to buy parsley to plant.

When Germano wandered back, he was chipper. “Do you know he has incredible rare species of plants on his balcony? He said maybe I should get bigger pots for mine.”

The next night, Germano handed me a business card that had been slipped under our door. It said “Buona Pasqua. Roberto Melani.” Roberto was a doctor.

Germano thought for a second, “The pervert! He’s introducing himself.”

Germano walked confidently to the balcony and called out to the man, who was huddled over his flowers. He thanked him.

Later that week, our friendly neighbor called across the balcony to Germano, explaining that he had received too many gifts from his patients and he would like to give us some. Germano rushed inside uttering, “I’m meeting him downstairs now. Where’s that business card? What’s his name?”

Germano came back embracing a huge bag of Sicilian tomatoes, lemons, panforte, mushrooms, celery, and onions. And a package of parsley seeds. The happy smells filled our kitchen.

Now, Germano and I have put out a charming white patio set of chairs on our terrace and eat our lunches there. We have terrace dinner parties by candlelight. I lie out in my bikini to get some sun or read a book outside by the morning light. I lend a hand to the poor flowers I spent two years neglecting.

I can thank William, the American musicology student in Naples.

We thought about what we could give Roberto in thanks. I’d like it if Roberto lowered a bucket from his balcony so that we could place the gift in there for him to pull up. Then maybe, just for good measure, I’d holler up to him, “Grazie, Robe!”