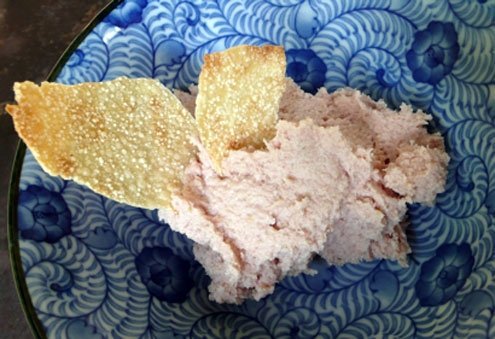 Mortadella "foam" is an Italian delight.
I

n my decade of nuts-and-bolts experience as the manager of a cooking school that caters to clients from all over the world I admit I’ve come across a few food-related facts that — to an Italian, at least — are quite unusual.

For example, there are people who don’t and won’t eat olives. I don’t happen to know a single olive-averse Italian. Then again, we’ve been eating them for thousand of years. We’re sort of used to them as tasty nourishment, as a snack, as finger food. Don’t get me wrong: I understand that olives might be an acquired taste, one that some never pick up. I for example don’t eat peanut butter. Food has a powerful cultural component.

There are also people who don’t eat preserved anchovies. I discovered this bewildering phenomenon while living in Texas. According to my roommate, “they’re dirty things.”

I’ve never knew how she’d acquired this piece of sanitary knowledge — until I tasted my first chokingly salty, soggy, greasy and totally not-Italian anchovy pizza at a famous American restaurant chain. I had to admit she had a point. All anchovies are not treated equal, let alone humanely.

Most amazingly, at least to me, are the people who won’t eat mortadella. I still remember the worried look of a woman attending a pre-cooking food tour in Assisi. We’d prepared a spread of the most delicious local cheeses, olive oil, truffle paste, wild boar salami, artisan prosciutto and mortadella (baloney or bologna in the U.S.). “We don’t eat that,” she said, scowling. She meant the mortadella. I almost panicked.

For most Italians, mortadella is food from the field of dreams. Gastronomically speaking, I mean. The name comes from mortaio, the mortar that was used with a pestle to grind together pork and spices.

Ask any Italian what they think of when the imagine a crispy fresh baguette filled with paper-thin mortadella and they get glassy-eyed. Pane e mortadella makes the best (and simplest) panino on earth. It’s a whole baguette for me, preferably just out of the oven.

The mortadella panino, for most Italians, has been a long and trusted companion on noisy school trips while growing up as well as sunny afternoons at the beach. It’s been lifesaving nourishment while on a marvelous mountain hike. Me, you, mortadella, and the scenery: Almost romantic.

Have you ever tried mortadella grilled and barbequed? If not, do: with a drizzle of aged balsamic vinegar added. Maybe on a summer evening when you’re in the company of friends, the laughter is plentiful, and the wine deep and red.

Mortadella, my friends, is not baloney.

Mortadella is not bologna.

It does however come from Bologna where the Guild of the Mortadella Sausage Makers was established in 1376 and the Confraternity of Pork Brothers was recognized by no less than Pope Paul V in 1615.

We fell in love five centuries ago and the love hasn’t wavered since.

— Blend all ingredients into a luscious spread and serve with crusty toasted bread and accompany by red wine. Serve with other appetizers or as a snack to while away the evening.