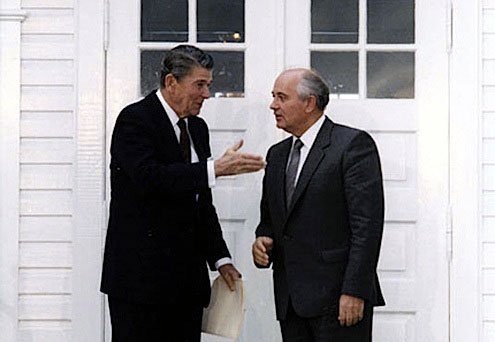 o it’s in the bag, or nearly. Surge is the word. A silly word. An intransitive verb that equals only itself. Surge it is.

Whatever became of parlays? What happened to summits? What became of the hurly-burly of… talking — in the presence of presidents, that is.

Yes, I know, history ended all those years ago. No more Reagan. No more Gorby. No more Shuttle Diplomacy and chitchats in places like Iceland, Finland, Switzerland, and (yes) New Jersey (Glassboro, 1967). Who remembers Kissinger in Paris?

A time, that old time, of different and more arcane surges, of winks and bluffs, deals and counter-deals, of sides wholly convinced they’d surged more efficiently, more cynically, but over tables.

Punch “summit” into Google these days and you get truck parts and Summit Brewing long before Brezhnev.

Confrontation is norm and fashion. It’s Farragut’s damning revenge, all torpedoes and throttle, flag and vow.

So why my yammer about talking?

Because it’s a bad habit to lose, particularly four years after betting the house on biting your tongue and working the global blackboard with claws alone. The grating has blood on its hands.

Iraq, cinch that it was but wasn’t, retrospectively suggests an Iceland before the fact might have helped. Something to placate irascible hindsight.

But the mood said no. And still wishes to. To no wise end. Solutions in a vacuum are doomed on a planet of interconnection.

With Iraq in actual, not partial, shambles, why not heed the past to test the future? Why not a summit before yet another unilateral charge, this one desperate?

You are president. This is what you do.

First, you get your own man’s approval, and Maliki (reluctantly) agrees.

Then, this is what you say:

Hassan, Moroccan king, son of a pacifier, I invite you to come to Iceland.

Assad, son of a Syrian bulldog, join him.

Ahmadinejad, if the others will have you, come as well, if you dare — to show your manhood.

And Ban Ki-moon, the new, fresh face of the UN; move into a present tense to assist your hobbled body.

Come all ye faithful and let’s talk about the future of Iraq.

I do not promise, you say, that I will not follow a surge of words with one of men and armor, but first let us exchange views.

I will explain mine. But I will also listen.

Know before you come that I’m in your neighborhood to stay, more now than ever, so best we reacquaint ourselves. My soldiers are dying to keep you, you the secularists, alive and thriving. Saddam annoyed you — Saudis, Syrians, Jordanians; all of you; he’s gone.

But the religious cork has come unscrewed. Can we alone stop it? Briefly perhaps, but not indefinitely.

So you who live where we’ve tread by choice, gather to give us your thoughts. Be brave.

Ahmadinejad says we’re monsters and plays the nuclear card. He’s a fool borrowing the bullying tone of latter-day Soviets. But let’s have him come so he’s not left out to whine and prance. And if he refuses, so much the worse. He stands alone.

Let us all talk behind locked doors. After which you can object and so can we. In fact, we can all abandon the table. Such things can happen at a summit, among friends and enemies both. Again, let us try.

Mubarak, think particularly of your situation: you hold down a fragile fort, so what next? If we press ahead in Iraq only to withdraw what happens in Egypt in two years, in 10? Jordan, Syria, Iran, Saudi Arabia: help us to help you.

All this didn’t and couldn’t happen. Even its imagining remains near-treasonous.

Which is a pity, since talk isn’t necessarily liberal. It can be the fallback opportunism of reasonable conservatives. In conservative terms, Nixon had no business in China nor Reagan with Gorbachev.

Instead, they squeezed through openings that became history — something the United States once knew to do. Little visions, as it were.

Little visions that this American ruling class ignores in favor of a resolve that still lacks anyone’s support but those concocting it. The stubbornness of fools (reflecting an increasingly nonverbal, gladiatorially-inclined society) who fear and reject conversation with enemies, resisting as too weak the first step to any enduring upper hand.

Onward, then, into the surge, with little optimism at home, even less abroad, and anti-American antipathy growing scabrous, established layers. And not a table desired, nor one in sight.