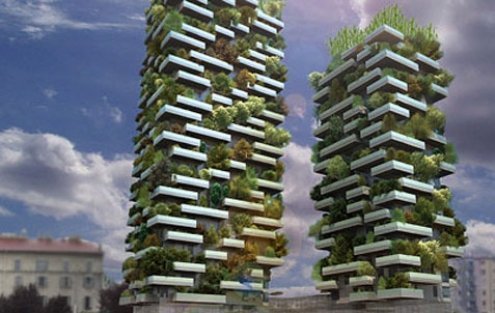 L'Isola will be dotted by new apartment complexes.
I

live near an area of Milan called, L’Isola, the Island, which is north of Garibaldi Train station. Historically, it was separated from the rest of the city by the Seveso River, the Martesana Canal and a dense network of train tracks that could only be crossed at the Fountain Bridge, Ponte della Sorgente, on Via Farini.

North of Piazza Lagosta and Piazza Segrino, a large paupers’ cemetery called La Moiazza formed another barrier. A graveyard established by Napoleon contained the remains of a few celebrities, including Napoleonic-era Finance Minister Count Giuseppe Prina, who was stabbed to death in 1814 by an umbrella-armed mob led by local patriot Federico Confalonieri. The cemetery was closed in World War I and later became a muddy field where children played soccer. The bones that surfaced were literally kicked away. Saying “Faccia della Moiazza” is still considered an insult.

L’Isola developed in the late 1800s as a working class neighborhood composed of narrow streets and small piazzette. Because of its isolation, it maintained a friendly, small-town charm. Its residents made silk, washed the clothes of the wealthy, and worked in big factories along the waterways. The union presence was strong and the neighborhood hosted the first office of the Italian Communist Party.

In 1920, publicly funded laborers’ dwellings went up. Stores and artisan workshops faced the street on their ground floors, with factories and warehouses inside the courtyards. On the upper floors, small crowded rooms opened onto long balconies (ringhiere), with a communal toilet in the corner.

In middle class buildings, two-to-four room apartments with private bathrooms were wrapped around a stairway landing (pianerottolo). My mother-in-law bragged that her apartment was pianerottolo and not ringhiera.

Architectural styles vary. Some buildings are Art Nouveau, others of the Fascist period, still others more eclectic. On Piazza Lagosta there’s a castle-like structure made from red brick and Lombardy stone. In the 1930s, Milan rationalists Pietro Lingeri and Guiseppe Terragni built residences with vertical columns and low, horizontal blocks.

As a poor neighborhood, L’Isola also attracted brigands and lowlifes (malviventi). My friend, Eugenio, who grew up on Via Ugo Bassi, says criminals and freedom fighters hid in the maze-like inner courtyards and passageways of buildings along Via Borsieri. Even Giuseppe Garibaldi and his men found refuge there.

The Sacro Volto parish was central to community life. Local priest Eugenio Bussa organized summer camps for street children. During World War II, he helped hide Jewish children. When Fascist authorities arrested him, his parishioners protested until he was freed. The nuns at the nearby Francescani Missionario d’Egitto ran an orphanage and taught single mothers the art of fine embroidery used in ecclesiastical vestments. At the Teatro Verdi on Via Pastregno, the Tramagnini family taught children to be circus acrobats and to sing opera. Many of them went on to sing at La Scala.

Prime Minister Silvio Berlusconi grew up here and attended the local elementary school. During parish social activities, he would sing and tell jokes, while his lifelong friend and later business associate Fedele Confalonieri played the harmonium. Confalonieri’s uncle was Giovanni Borghi, who ran refrigerator giant Ignis before and after the war. His workshop was in Piazza Muniti (In 1963, Time Magazine described him as “a stocky, bull-necked man who occasionally strips to the waist and works on a machine in his factory…”)

Isola also played an active role in the wartime Resistance. Houses bear plaques honoring the fallen. In December 2009, a monument to the Resistance dead went up in Piazza Segrino. But wartime bombing destroyed the neighborhood’s factories and the Martesana canal, on which factories had depended, was eventually filled in.

For two centuries, residents of L’Isola repeatedly defended their Island neighborhood from encroachment. After World War II, they blocked the construction of an elevated road that would have connected them to the rest of the city. In the 1970s and 80s, they resisted real estate development, some of it later revealed as fueled by corrupt funding.

But the latest threat to L’Isola’s identity has proved too strong. Despite passionate and concerted and resistance, residents have failed to thwart spectacular building projects connected to the Milan Expo 2015 fair.

On Via Castillia, in an ex-railroad warehouse, the Riccardo Catella Foundation displays a model of the largest building site in Europe. Soon a huge “nodo intermodale,” a vast transit hub, will flank skyscrapers designed by renowned architects. Island no more, L’Isola will be linked to the city by a grassy pedestrian island.

My friend Eugenio insists there’s Mafia money behind the new construction. He whispers a name. He sneers at the hubris of the project. In September, the Seveso River underneath a new subway line leaked through barriers and caused €40,000 in damages.

Though Milan Chamber of Commerce has declared L’Isola one of five commercial areas whose stores and workshops deserve preserving, the skyline is already chock with cranes. Real estate prices are soaring. Stecca Degli Artigiani, a wing of a former factory that was once a haven for artisan workshops and art galleries, was recently torn down.

These days, a look down Via Confalonieri now reveals dazzling, glass buildings that house regional and city government offices. Inside one courtyard, as a quaint remnant, is a small, low-cost apartment building, with peeling paint and laundry hanging on the balconies.

Its owners, true to L’Isola’s old spirit, refused to sell.