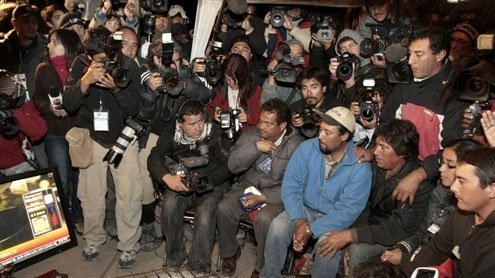 You couldn't have scripted it better...
F

rom a damp dungeon come unearthed Chilean miners. Some thank God. Others prepare to cash in. What is somewhat less than a miracle is called a miracle. Naturally, everyone watches. “You could not write a script any better than this, could you?” an American anchorwoman says excitedly. Yet by now excitement is a kind of script.

Hyperbole is cyclical. The snap-fasteners attached to morality plays are looser or tighter depending on public craving.

American Yellow Journalism of 1900 cobbled fact and fiction into babbling brooks of adjectives, putting big-city excitement in privacy’s stead and giving the news locomotive its modern belch. Front pages oozed criminals, adulterers, wicked Spaniards, and advertised the greater grandness of war. Frenzies were made up and sustained in the bombastic spirit of 19th century frontier journalism that labeled all enemies as fools or liars, or worse.

Twentieth-century restraint got little help from the widespread introduction of new systems of communication. Rumor and bad news only traveled faster. Yet when Europe’s big cities remained immune to the unprecedented battlefield horrors of World War I, the bottled-up fascination for calamity and wickedness only grew. The 1930s brought news of dictators, national depression, crime syndicates, high-profile kidnappings, dirigible catastrophes and bank heists. The provocative was both excitement and reward. Flawed cities couldn’t get enough of their own modernity.

Until they were flattened.

The pause that was World War II caused the global short-circuiting of the social, economic and moral order and kicked the air out of optimism’s tires. Frenzy peaked and strangled itself. There were no more urban bystanders. Devastated were Rotterdam, Warsaw, Hamburg. Nearly three million tons of bombs fell on Europe. By war’s end, 20 million civilians were dead or homeless. Add the Holocaust and voyeurism lost its cache.

Though territorially removed from Europe’s ruin, American felt the chastening pall. Around the world, in fact, questions of about conscience and the meaning of the human enterprise actually pushed some of the sensation industry underground. The Soviet menace reined in the tabloid emphasis on the wicked and the prurient, lest the other side exploit a weakness.

The potential for nuclear conflagration also put limits on sensationalism, attaching a caveat to partisan venom and putting implicit limits on the vituperative. In Europe, existentialism emerged. The press on both sides of the ocean worked to resist panic and frenzy because the wound of World War II had left serious worries about the consequences of unchecked human vulgarity. For a time, at least politically, morality acquired a more tangible collective meaning. The soberness of a nation’s public face mattered in principle.

That interval is over.

The Cold War is forgotten, as are memories of world war’s more literal humiliations. The interconnected globe is back to foraging for entertainment and satisfaction amid the showmanship of emergency, crisis and even rescue. Since the public packaging and transmission of gaffe and woe is simpler than ever before, large and small morality plays are promoted and staged on an unheard-of scale. Rescued miners are a gross national sales pitch.

This would seem more suited to the Yellow Journalism days, which blurred fact and fiction in a crass effort to generate public outrage or win reader empathy. Privacy was nonexistent. News and heavy-handed emotionalism coexisted.

It took a painstaking century to step back from such a spiked front page, from a world portrayed as consisting only of good guys or bad, of good deeds or dastardly ones. It took longer still to stop trivializing the words crisis and emergency. Concepts of discretion and confidentiality emerged as a result.

But today’s hyperbole is well on its way toward dispensing forever with objective shadings and the subtlety associated with mature detachment. Its facilitators instead fall back on zealous personal testimonials to imbue events with scripted significance and advertise the result — whether rescued miners or terrorist victims — to a visually-oriented population increasingly at home only with senses and sentiment and thus estranged from the less obvious demands of historical context, informed discretion, and a perspective governed by manners, each one an asset that alongside self-reliance helps shape the backbone of any enduring system of personal ethics.