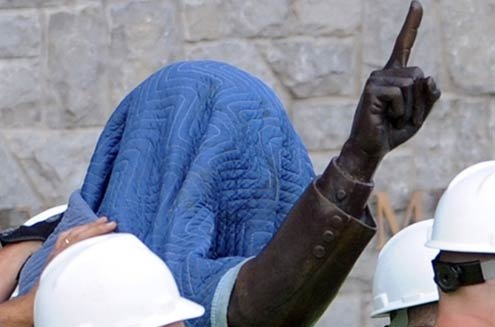 o nation takes punitive revisionism more seriously than the United States. Heroes who betray are household grime that the country’s collective product, its citizenry and advocates, exists to publicly scour away. Not even the Soviet Union, which airbrushed out disgraced figures from May Day parade photographs, punished so zealously.

The latest such scouring involves football coach Joe Paterno, the once-saintly Penn State untouchable who was recently found complicit in a sexual abuse scandal involving a chief assistant convicted of abusing young men over a period of decades. Paterno died earlier this year at the height of the scandal, with his ardent defenders suggested he knew nothing about the abuse. That contention has since been debunked, ushering in rage and rhetoric.

First, his alma mater, Brown, whose team he once coached, decided to end all honorifics associated with him, in essence canceling him from its sporting past. Soon after, Penn State removed a statue of Paterno located outside its stadium. University officials announced the statue no longer sent the “right message,” American jargon applied to all that which produces controversy and liability.

Paterno is to 21st-century American what Lenin and Stalin were to post-1989 Soviet bloc nations, whose populations briefly and cathartically entertained themselves by tearing down Soviet-era statues — only to cringe, some of them, when the release of Communist-era files demonstrated the extent of citizen complicity in regime tactics.

But spitting at the past doesn’t make it go away. The importance of cautionary tales and the ambiguity of legacy itself are intelligent arguments for resisting trigger-finger erasure.

Iraqi bogeyman Saddam Hussein, vindictive to the core, was also instrumental in improving education, medicine, the creation of urban roadway system, and the establishment of a functioning bureaucracy.

Paterno was beloved not only because he won games but because he seemed like an affable and avuncular figure, the kind the United States depends on to fulfill its Norman Rockwell suggestion of a generation of generous, reliable grandfathers who dote on children and grandchildren alike, part of an untouchable child myth,

In truth, and not surprisingly, Paterno was in fact a ruthless man, as most winners are, attentive to a two-sided ethos that reserved one face for what people imagined him to be, in fact needed him to be, and a second one for the less agreeable nitty-gritty of the day-to-day. When the latter trumped the former, the Hollywood ending collapsed.

Moralistic America is devoted to object lessons, and in that sense Paterno’s fall from grace suits a country determined to use public hypocrisies to cover for millions of smaller ones. It’s witch trial righteousness. Add the sexual component, which burrows into volatile Puritan wrath, and the punishment approximates damnation (“The saint in black cleats sold his soul, and Satan leads the dance,” wrote one devout columnist) The American Catholic Church, awash in small and large pedophilia scandals, has already had to reckon with this rampant mood. So did Bill Clinton in the late 1990s. The Starr Report into his abuses was rife with Jonathan Edwards vitriol.

Clinton, and before him Richard Nixon, were ultimately let off American tenterhooks. Clinton fell back on charisma (not everyone hates devoted womanizers, women in particular) and Nixon worked to achieve elder statesman status. Neither was associated with abusing youth, the deadliest of all American sins, since youth is at the core of the American Dream and its sexual short-circuiting seen as wrecking adulthood, something that may or may not be true.

Punitive revisionism exists to revile those who dare to interfere with the near-mythical innocence of growing up. Again, Disney-myth American invests billions in the advertising and the defending of child innocence; a real and imagined collective realm conjured mostly by well-meaning if sanctimonious adults (“It is shameful to deify men who put nationalist ritual before children,” wrote another essayist). The revering of children is a key part of the American glue and its business. The spangled canon depends on “parenting,” a relatively new verb intended to level the child-adult playing field. Once, there were parents and children, with the two sides often (and intentionally) far apart.

But à la Paterno repairing remains a risky and supremely emotional undertaking. It pays no heed to the darker side of leadership, a constant since recorded history. Good men and women, popes and saints, shamans and truth-seekers, yielded as needed to the unsavory, took shortcuts, and often paid only passing attention to consensus. Visionary enterprises included slaughters. Many heroes proved ultimately contemptible.

Consider Time Magazine‘s Man of the Year category, assigned, the magazine always said, in “for better or worse” terms. Applying moral outrage and punishing revisionism to those choices would eliminate Hitler (“Lesser men of the year seemed small indeed beside the Führer,” wrote Time), Stalin, Pope Pius XII, Ayatollah Khomeini, and — why not — the Baby Boomers (1966), some of whom Paterno coached.