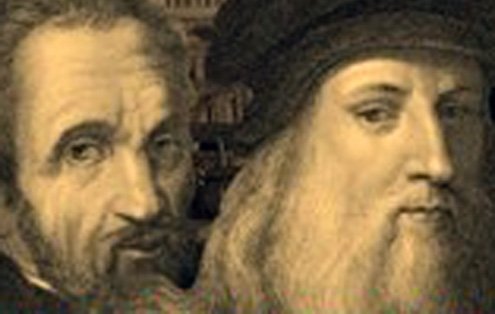 Michelangelo and Leonardo, contemporaries, spent considerable energy insulting each other.
I

n October 1503, the head statesman of republican Florence commissioned Leonardo da Vinci to paint a fresco on a mural in the Sala del Gran Consiglio inside the Palazzo Vecchio, the epicenter of Florentine politics.

Leonardo received a hefty initial sum — 35 fiorini larghi — from gonafaloniere Piero Soderini, only to renegotiate his contract the following May with Soderini’s chancellor, Niccolò Machiavelli. A notorious procrastinator who had taken three years to complete his “Last Supper,” Leonardo had yet to finish his cartoon — or preparatory drawing — for “The Battle of Anghiari,” a depiction of the 1440 victory of Florence over Milan. Despite this, Machiavelli was generous with Leonardo, granting him an extension of time and a pay increase.

A few months later, Soderini commissioned another artist, Michelangelo, to create a fresco on the wall opposite where Leonardo was to work, sparking one of the greatest rivalries in Renaissance history. Generations of artists were inspired by the fruits of their contest, which cast the role of the artist into new light. “It was in this competition,” wrote English art critic Jonathan Jones, “that artists were first fully and openly recognized, not as artisans doing a job of work, but as godlike creatures of the new.”

The Sistine Chapel ceiling commission was still four years off when Michelangelo began his cartoon for the “Battle of Cascina,” a rendering of the 1364 conflict between Florence and Pisa. With his haunting “Pietà” on display at St. Peter’s and the colossal “David” under his belt, Michelangelo was the greatest sculptor alive, but at the time he was pitted against Leonardo he lacked any significant professional experience as a painter.

Yet Soderini sensed that Michelangelo was imbued with superior if not divine talent that would give the equally brilliant Leonardo a run for his money. “Perhaps the shock would goad [Leonardo] to finish,” wrote Jones, explaining Soderini’s competitive move, “and if that failed there would in any case be a work by Michelangelo.”

Both native Florentines and the indisputable masters of the Late Renaissance, Leonardo, courtly, dandyish and gracious, was the polar opposite of the fussy, disheveled and fiery-tempered Michelangelo, who at 29 was two decades Leonardo’s junior. Their biographer, the Mannerist painter Giorgio Vasari, said “a very great disdain” existed between them, which a few bitter episodes illustrate.

As a member of a 1504 committee to relocate the “David” statue in Florence’s Piazza della Signoria, Leonardo proposed that the six-ton masterpiece by placed in an obscure niche at the back of a loggia. Michelangelo in turn once publicly humiliated Leonardo after being put on the spot when a group of men asked Leonardo for his opinion on a passage of Dante. “Michelangelo will explain it to you,” said Leonardo as the sculptor serendipitously happened by. Michelangelo, sure that his rival was mocking him, shot back using the disrespectful tu form: “You explain it yourself, you who have made the design of a horse to be cast in bronze but who was unable to cast it and abandoned it in shame,” a reference to Leonardo’s failure to create a colossal equestrian statue for the Duke of Milan, Ludovico Sforza. After his tirade, Michelangelo stalked off, leaving Leonardo blushing with embarrassment.

The pair also had disparate artistic styles. Only preparatory drawings exist for the “Battle of Anghiari,” which Leonardo worked on in his private quarters at the Basilica of Santa Maria Novella. A celebrated copy by Peter Paul Rubens in the Louvre shows a writhing mass of horses and warriors twisted up in the cataclysm of war. The scene reflects Leonardo’s fascination with the natural world and battlefield knowledge that warring patrons like Sforza and Cesare Borgia made him familiar with.

Across town in a hospital room at Sant’Onofrio, Michelangelo dedicated himself to his most sublime subject, the heroic male nude. The “Battle of Cascina,” alternately titled “The Bathers,” depicts a group of naked soldiers scrambling out of the Arno at the moment the Pisans are about to attack. With the original lost, it is known primarily from copies made by Aristotile da Sangallo and Marcantonio Raimondi.

Leonardo began painting his mural on June 6, 1505. No sooner had he started than rainwater soaked his cartoon. The roof in the huge hall leaked, which Leonardo saw as a bad omen. Worse, Leonardo again made the disastrous decision to paint with oil on a dry wall — something he had also done with his already-deteriorating “Last Supper.” The upper portion dried too fast, and the colors eventually ran together.

Perhaps to no one’s surprise, Leonardo abandoned the fresco shortly afterward and returned to Milan. During a 1564 remodeling of the Gran Consiglio, the beginnings were painted over by Vasari. (Attempts to reveal it have been unsuccessful). Leonardo’s absence might have permitted Michelangelo to finish his fresco with ease, but he was summoned back to Rome to sculpt the tomb of Pope Julius II, never putting brush to paint.

The cartoons of the “Battles,” both visions of Florentine patriotism, were displayed at the church of Santa Maria Novella from 1506 to 1512, when the republic was abolished and the Medici family restored to power. It seemed every artist alive flocked to pay their respects to Michelangelo’s remarkable creations until “Anghiari” disappeared, and “Cascina” was cut away by admirers. Only replicas remain. “While they remained there,” wrote artist Benvenuto Cellini in his colorful 16th century autobiography, “they served as the school of the world.” So did Leonardo and Michelangelo.