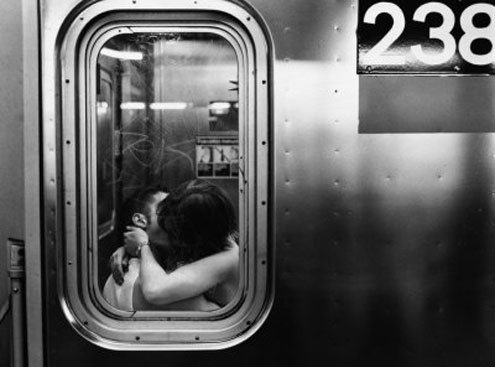 ... And they thrilled to share such intimacy amid a crowded room.
S

he had picked him out of a crowd and approached him with what he immediately dubbed a cheap pick-up line. They laughed with their eyes and stole off to a quiet corner.

Later, lying together on damp sheets, their bodies touching in so many spots (that are never enough), she said, “Well, the line worked.” Giggling to herself, she tucked her knees to her chest and curled into him, pulling his heavy arm across the soft valley where her hips met her waist. He laughed too and ran his fingers up and down the length of her body until she shivered.

She awoke before him and watched him breathing. His cheeks were flushed and his curls wild. She placed a hand on his chest and with eyes still closed he placed his atop it.

That was when she knew she would see him again.

That first night they’d exchanged basic details — she was an events planner, he a stand-up comedian, where they lived, how they’d ended up at this particular party, and how neither of them would recognize a celebrity on the street.

But none of it mattered as much as his hand on her hip and the volts of electricity that passed between them. Instantly.

She vaguely recalled him making a joke while they lay, heavy-limbed, their mouths frozen into smiles. She hardly heard it, but laughed anyway. She’d felt nothing but joy.

The next time they met he had just finished a show when she entered the bar. She asked how it was and he said it was good. They ordered a drink and sat next to each other with their knees touching. They felt it at once and exchanged a glance. Their magnetism was undeniable, and they thrilled to share such intimacy amid a crowded room.

As he recounted the act and replayed some of his best lines, she sipped her beer and listened. He paused. It was a joke and she wasn’t laughing. Thankfully others at the table were, so he continued. She tried to follow along with his comic cadences, but his punch lines came like the best punches, unexpectedly. Yet the only impact was her non-reaction. And like the best punches, it stung.

The others laughed to fill her silent spaces, and she compensated for them by pressing her hand to the back of his neck and lacing his curls through her fingers. His hand tightened on her knee.

In the taxi on the way back to his house, he was still ebullient about his performance and ran a few variations of a new joke by her. His enthusiasm was so endearing, his eyes so bright (even in the dark), that she forced out a weak “ha,” and rested her face on his chest.

They tumbled up the stairs. He chattered away about what might make the joke even funnier, while she admired the way his lips curled up and outward along with his eyebrows when he asked her opinion, or worse, tried it out to gage her reaction.

At which point she would dip her eyelids low, and playfully punch him, while forcing out phrases like “Oh you,” “Oh stop,” and “Come on,” interspersed with a host of those strange sounds one makes with the mouth that so often take the place of laughter in conversation that is only mildly amusing.

By the time they made it to his room, it hardly mattered. Chuckles and snickers came soon enough as they rushed to untangle his pant legs and her tights, and when arms and legs banged against the wall separating his room from his flat-mate’s, he muffled her giggles with a warm palm. The same palm muffled her cries for hours after.

Finally they lay quiet and caressing, in awe, until sleep overtook them.

He awakened her the next morning with hot chocolate. They sat, naked thigh to naked thigh and blew into the steam. Not five sips later, the mugs were abandoned to the bedside table.

While she dressed, he filled her in on his next show dates. He said that she should come and watch him.

She had a busy week ahead, but said that she would try.

Instead they met up afterwards. Once at his place, and twice more at hers. He would arrive all rosy and eager to try out his material. She would hide her cringes in his chest or the sides of his neck, and when she could take it no longer, his inner thigh. For every awkward laugh-less moment, she kissed parts of him until he shuddered and silenced.

Guilt came in place of dreams one night, and she wondered how long they would last. His embrace tightened around her in his sleep and she liquefied.

Of all of the troubles that lovers endure, her dilemma seemed, well… funny.

As the first grey daylight flowed in, she laughed.