No flipping, no pancakes, no frying 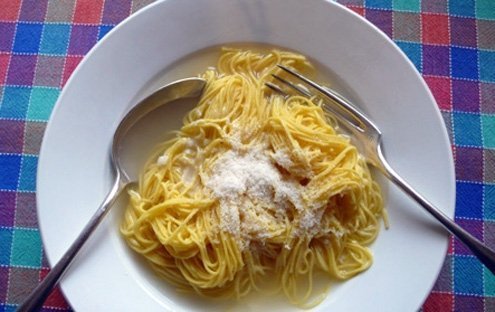 Tagliolini in brodo: Please do not fry…
F

ood writers are losing out to food illiterates. A few days ago, on a popular food website that modestly calls itself “the world’s most trusted authority on deliciousness,” I read the following advice by a young cook as part of rambling guidelines for Tuscan Ribollita soup:

“I always try to use some combination of the most basic aromatics, such as onion and/or its close relatives, like leeks and shallots, plus garlic, carrot, maybe celery. But beyond that, go wild! (And frankly, if you hate garlic, carrots, or celery, by all means leave them out.)”

If you hate meat, leave out the steak. Go wild!

“I like to pull the leaves from the stems, but if you simmer it long enough, even the tough stems will soften up in the soup eventually.” (Days? Weeks? Months?)

Next, his take on beans, “Cannellini beans are traditional, but you can use navy beans, cranberry beans, kidney beans, whatever…”

Finally came his views on bread and frying (yes). “This is another area where you’re free to break with tradition. Originally, stale bread would be added to the pot as a frugal, clever way to breathe new life into an otherwise inedible loaf, while stretching the soup leftovers… If you have stale bread, use it; if not, fresh is better than okay.”

Which brings to the “pancake.”

“The trick is to transfer some of [the soup] to a small nonstick skillet and continue cooking it there, stirring and tossing it often. It’ll just kind of bubble and sizzle and sputter for a while, and you might start to wonder how in the heck it’ll ever become a pancake, but if you keep with it, it’ll eventually dry out enough to become a tighter mass that holds together. If your flipping skills are good, you’ll be able to rotate the ribollita pancake in the air and catch it without it coming apart.”

“Flipping skills.” He really wrote this. Ribollita, one of the most celebrated soups of the Italian gastronomic tradition, is suddenly flying through the air, a stodgy oily “pancake” mass that even my dog Google would probably sniff but pass on (with disdain).

How can they write a recipe suggesting cavolo nero can be simmered “eventually.” Tough isn’t a strong enough word to describe these stems. By the time they soften into anything edible the rest of the mixture will have disintegrated.

As for the old bread, it matters because using fresh bread will transform the soup into sickly porridge. Is ribollita supposed to be porridge? No.

Why the “whatever” approach? Why drop or substitute simple ingredients that represent the foundation and definition of a recipe? Why comments like, “This kind of soup is practically begging for variation.” Who says?

Yes, of course, innovative and creativity are valuable traits in cooking. But before starting a chain of pancake soup restaurants, make an effort to understand tradition. Don’t preface a recipe with the word “technically,” to then go on and explain the recipe as you’d do it, or as it might be or could be done. That’s not a recipe. Breaking from tradition should not be an end of itself.

Ask yourself why any given recipe is so famous? Why is it that billions love lasagne, pizza, cassata, gelato, caprese, focaccia, tiramisù, to name a few? The reason is the taste of the real thing. It’s sublime. That’s why authenticity deserves a little knowledge and a little respect. A recipe may not be holy but it does have ingredients of the sacred.

Now, please try again. This is a very simple recipe. You won’t have to put down your iPhone for too long. Just please concentrate. And keep frying pans out of the picture.

— Combine all ingredients except the tagliolini in a stockpot and cover. Adding salt to the cold water prevents the formation of foam.

— Simmer gently for approximately one hour or until the chicken is cooked through and the meat falls off the bones. Pour stock through a metal sieve to remove the chicken and vegetables.

— Transfer the stock — about one cup per person —to a smaller pan and bring it to a high boil. Taste and adjust salt if necessary.

— Add noodles and cook briefly, no more than one minute. The very thin noodles overcook quickly as they continue cooking in the hot stock.

— Ladle broth and noodles into bowls and serve very hot with grated Parmesan if desired.

Please do not cut the tagliolini with a knife. Eat with spoon and fork. Yes, I know, this means you’ll have to put down the phone for 10 minutes. But it’ll be okay. Trust me. You’ll make it. You might even enjoy it.