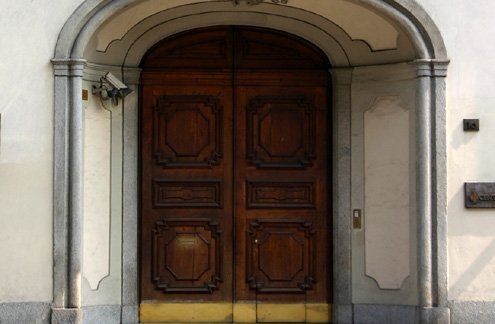 eaders may recall my first column in this magazine in which I discussed how my car’s satellite navigation system affected my sentimental life. Since then, it has also taken the drama out of my weekends — namely my children’s rugby or volleyball games. Pre-GPS, we were (regardless of extra time allotted for being lost and late) invariably lost and late. We roamed the fog of the Milan hinterlands in anxious and angry tears. Two years later there is no badly-lit parish gym or pitted and grassless field that George the GPS can’t find.

If only George’s skills extended to the actual venue. If only he could navigate the maze of closed gates and dark halls of a sports/school complex during the weekend or manage the rugby corollary to Murphy’s law: The bleachers and locker rooms are always on the field’s far side.

Being lost is as integral to institutional Italian life as the tomato is to Italian cooking. Had a childbirth field trip not taken me to the correct wing of Milan’s Mangiagalli maternity hospital, my children might have taken their first breaths among the mops and buckets of a broom closet. Despite years of school conferences I find myself inevitably roaming halls of flaking linoleum and knocking on identical doors before finding the principal’s office. If I die in an Italian building my spirit will probably wander for decades before it can find someone to lead it out.

A typical encounter with an Italian public building — school, hospital, municipal office — begins with the entrance, or lack of it.

New buildings, built according to modern architectural canons that eschew easily readable visual cues, will have some unmarked break that is indistinguishable from the rest of the building. This is the entrance.

Pre-World War II building entrances will be more easily readable, but will also have a sign that informs you that the entrance you’ve found is no longer the main one. The new one (several blocks away) will feel decidedly makeshift or even clandestine.

The information booth you chance upon hopefully will look like the outpost of a dead totalitarian regime; dark, forbidding and empty. Long halls of identical and unidentified doors extend in all directions. Disgruntled impiegati statali, tired of redirecting lost citizens, lie in wait behind them. Signs offer little comfort. Most often, they are permanently temporary photocopies that feature historic specimens of yellowed scotch-tape and an archive of crossings-out.

Italian public buildings give few clues about how the institutions they host are organized. They do not reveal where to go or the relative power or responsibility of anyone working there. Whoever runs the place could as easily work out of a pantry as from a large office; there is no way of knowing. Parallels between the government and the arcane political system these buildings represent are obvious enough.

It was not always this way. From ancient Rome to the Renaissance papacy, inhabitants of the Italian peninsula gave an architectural form to the state that left little doubt of where to go or who to see. Roman triumphal arches said, “Walk here. This is the way to the center of town.” The Romanesque church said, “Follow the main aisle to the important part.” The grand staircases of Renaissance palazzi led to the piano nobile. St. Peter’s colonnades form a pincer that leaves little choice; come closer, feel the power, check the balcony for direction.

Unlike the architectural manifestations of the current Italian state, those of emperors, popes and even dictators left little doubt about organization. Power centers were architectural centers. The defects of these governments were many, but like their buildings, they offered a commodity in short supply in Italy today: certainty. (This may explain the country’s sentimental weakness for parties and leaders with rigid ideological programs.) Such bald statements of power also gave clear symbols for any opposition to grasp and use; they gave concrete form to discontent.

Over the last year there have been several signs of a new and deeper Italian malaise — this in addition to the standard end-of-dinner-party-it’s-all-the-government’s-fault kind. An EU study reported that Italians were Europe’s unhappiest citizens. Gianantonio Stella’s book “La Casta,” about corruption, and Roberto Saviano’s “Gomorrah,” a look at the Naples Camorra, were both best-sellers. There’s nothing much that’s new in any of it, even if the state of Italian malcontent caught those who swear by Italian stereotypes off guard.

What struck me, though, was the vagueness of the overall threat. Inafferabile is the Italian word. Stella’s casta is recognizable but hard to grasp. And the symbol of its malevolent power is the mobile and fungible blue police car. The Camorra is everywhere but nowhere. Italians are unhappy because they feel uncertain and hopeless. They don’t know where they stand or where they’re going. There are no rules and no organizing hierarchies. No marble arch or grande palazzo marks achievable goals or a rallying point for dissent. There are just buildings with no entrances and no signs.

All you can do is wander and hope that someone will point the way.