“No divorce; no adultery…” 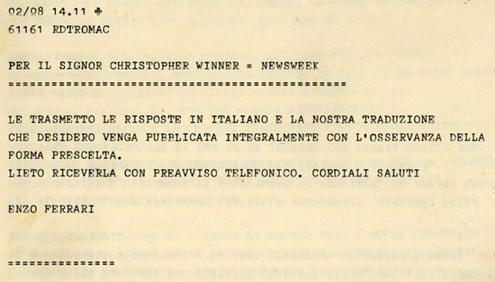 Clear instructions: In all, nearly 15 pages of telexed answers.
L

ess than a year after Austrian ace Niki Lauda, Ferrari’s lead driver, was severely injured in a Formula One crash at the German Grand Prix in 1976, Newsweek magazine decided to dedicate a cover story to the perils of elite European racing, hoping to interview carmaker Enzo Ferrari, who though well in his late 70s was still the patriarch of his brand.

Notoriously picky, Ferrari granted few interviews, usually only to veteran Italian journalists he trusted. But a year before the Lauda accident, in 1975, thanks to family connections, I had spent nearly a day with Ferrari at his Maranello headquarters near Modena. He had been cordial and polite to a young journalist 50 years his junior, allowing me to write about the meeting.

Knowing this, Newsweek asked me to approach him, which I did, calling his office and chatting with his spokesman. I explained the situation and asked if the ingeniere, or “engineer,” would agree to answer questions as part of an extensive interview. My request was forwarded, and two days later I was told Ferrari would agree to such a conversation, so long as he was the focal point of the story.

Despite the accident and Lauda’s stunningly swift comeback from head trauma and facial disfigurement, it was clear Ferrari did not want to appear as subaltern to a young driver with whom he’d had a stormy relationship.

I told the spokesman that Ferrari and car racing, not Lauda, would be the focus — reiterating what Newsweek editors had assured me. “Get Ferrari and we’ll open with him,” I’d been told.

Days later Ferrari, true to his word, sent a lengthy telex with detailed answers to all my questions, offering rare insight into his vision of racing and life. “Real passion for cars, for racing, lasts a lifetime. There’s no divorce; there can be no adultery.” Importantly, he added: “Journalism was among the most powerful passions I felt during adolescence. I became an orphan at 16 and stopped going to school. If I had great erudition I’d write regularly for magazines or newspapers. To me, writing well is a obligation that outdoes building cars.”

I sent the carefully translated material to New York headquarters, reminding them of the agreed-upon stipulation, and of Ferrari’s expectations. I was reassured that all was understood.

A week later Newsweek put Lauda on the cover and included a massively abbreviated version of the interview that took extreme liberties with both content and context (the “passion” remark was cut, as was that about journalism). I protested immediately but received no reply.

I then called Ferrari’s office, where his spokesman informed me told that Ferrari would never again speak to me, to Newsweek, or to any American media. I sent a near-supplicating telegram of apology to Ferrari directly, to which he eventually replied, through his spokesman, in typical uppercase telegram text. Translated, the message read: