No dinner in Gaza 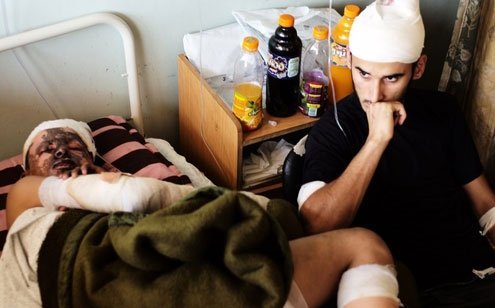 Since Israel began Operation Protective Edge in early July, 1,800 Palestinians have been killed and an estimated 520,000 have fled their homes. Israel has lost 67 soldiers and combatants.
B

y all accounts, my grandfather was a terrifying man. When my father and his siblings squabbled in the back seat of the car, he would — without stopping the car — turn around and slap each of the five children. “I don’t care who started it,” he’d say. “You’re all brats.” My father’s touch was milder. When my brother and I scrapped, he’d send both of us to our rooms so that we’d miss dinner and figure out how to get along.

As the Gaza crisis continues percolating, I wish — with the respect the situation demands — that someone would finally send both Hamas and Israel to their rooms hungry.

Of course the matter of Gaza is hardly a sibling spat. But the principle behind my father and grandfather’s approach is a useful one. Neither man was interested in the narrative. Neither cared who started it, who behaved worse, who was weak and needed protection or who was strong and deserving of punishment. Nor did they care whose version of the facts was “right” or if someone’s idea of justice should prevail. What mattered was that responsibility was taken and the madness stopped.

Sadly, the Middle East conflict seems to be about the very issues my father and grandfather overrode. The open wounds left by the end of the Ottoman and British Empires and by Nazism still fuel Middle Eastern unrest. Different visions of reality butt heads. Wrongs pile up as Hamas and Israel wrangle over the kinds of narratives my father and grandfather found so unproductive — with each side accusing the other of starting it or being the real villain.

Modern Israel and displaced Palestinians are the heirs of an abundance of tragic injustices. Behind their irreconcilable differences (though neither will admit it), the identities and founding myths of Hamas — as well as many Palestinian factions — and Israel are based on a history of having been victimized. On both sides, facts and a shared sense of grievance, which could have been used to create understanding, have instead evolved into the espousal of permanent victimhood.

Having been a victim is a static state of being. It’s lodged in the past and dead. It is tragic, yes, but can also represent a foundation to build on.

Victimhood, however, is very much alive. It is a beast that demands care and feeding. Victimhood means “playing the victim.” In the dynamic of a relationship, it designates a role that psychologist Stephen Karpman described in 1968 as the “Drama Triangle.” Karpman’s triangle is a three-way psychological game that, while destructive, provides benefits to its three players: victim, persecutor and rescuer.

The game’s payoff is that each player can shift blame as they wish. No one must take responsibility for their actions. It’s an emotional race to the bottom, as each player vies to reinforce the position that satisfies his needs. The victim needs a persecutor to blame for failure. The persecutor needs a victim to feel strong. The victim feeds the rescuer’s craving for dependents.

It’s a constantly shifting interaction and players may assume aspects of other players’ roles to enhance their payoff. Persecutors are often former victims who justify their cruelty as retribution for past abuse. Victims become aggressive to provoke reactions that reinforce their role as victims. Rescuers offer help that victims and persecutors reject or criticize (“Yes, but…”) because to accept the help would threaten their status. Rescuers who walk out in frustration are then branded as persecutors.

Throughout decades of wars and peace initiatives, Hamas and its precursors and Israel have oscillated between victim and persecutor. Both have rebuffed numerous rescuers, including the United Nations and the United States. Hamas and Israel mutually depend on interactions that protect them from the pain of taking full responsibility for reprehensible actions. Now they appear united in a spectacularly violent effort to force the international community into declaring one side the “real victim” and thereby legitimize its lethal tactics.

Bystanders perpetuate the dynamic, especially when their own agendas and identities can benefit. The game allows Islamic countries that identify with the Palestinian underdog to disassociate themselves from their own domestic failures. In Europe, old-fashioned anti-Semitism gets a self-righteous face.

This time, however, the Palestinians’ usual supporters, including Egypt and Saudi Arabia, have chosen not to condemn Israel as strongly they have in the past. Nor have they come to Hamas’ rescue. In America, younger generations no longer reflexively support Israel as their parents did. Perhaps the “parents,” finally truly weary, have decided to keep driving and let the kids duke it out in the back seat. Or perhaps they have finally agreed that the kids need their own rooms — two states.

Only one thing can stop the theoretical Drama Triangle. That is when one player — a family member, Hamas or Israel in this case — finally forgoes the momentary satisfaction of saying, “I’m not the problem, they are” or “someone has to pay.” Only if one player assumes responsibility for its destiny instead of delegating it to another player, can all three players mature into autonomous adults whose relationships are mutually constructive instead of mutually destructive.

It isn’t easy. According to psychologists, the Drama Triangle offers its players protection from painful emotions. There are subtleties. When one player tries to change a familiar pattern, for example, the others may enter “switchback” mode, upping the intensity to lure the defector back in. In a family context this may mean more slamming doors and colder silences. Applied to Gaza, it means more violence.

I don’t know for sure if my family’s discipline saved me from Drama Triangles and their like. Nor do I know if being banished from the dinner table helped me grow. But sometimes being confined made me realize it really was time to clean up my room.