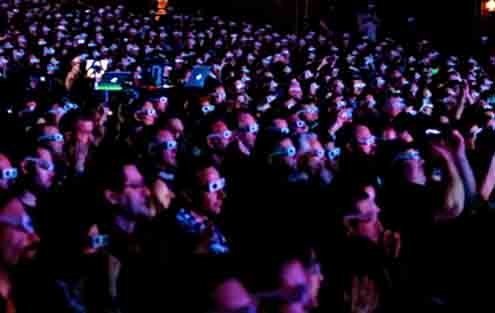 Kraftwerk in 3D: a crowd of white.
C

oncert crowds sometimes aren’t what you want them to be. Seconds after a raucous and sweaty mosh pit at a Misfits concert during my Rome high school years, my friends and navigated a bar fight that featured skinhead Italians swinging motorino helmets at their opponents’ faces. In London, a crew of large, drunk Canadians bearing maple-leaf shirts pushed and shoved their “dancing” bodies around the rest of the crowd for an entire Cut Copy set. At a Black Keys concert in Philadelphia, some youthful fans got overeager and tried to crowd-surf when the rest of the audience wasn’t paying attention — which is how the body of a teenager fell six feet, right onto his head.

I recently attended a Kraftwerk concert at the Orpheum in New Orleans with a friend. It was a last-minute decision that left us stuck in nosebleed seats with no room to respond physically to adrenalin-producing 1970s German techno-pop. Since we barely had space to shuffle, let alone dance, we decided to the stage and the 3D videos behind and dance near the bar. We must have been quite the sight: two white guys wearing 3D glasses over prescription glasses swaying with abandon to the industrial sounds of post-krautrock synthesizers.

Fortunately, no one was around to object to our incongruous flailing. As it turns out, we had no idea how good we had it.

Solange Knowles (of the Beyoncé Knowles family and of “Losing You” fame) was also at the show with her own family. But dancing was off limits. According to her account, a security officer — also black — confronted her son for smoking an electronic cigarette, when the smokers were white men in front of them. Her own dancing led a group of women seated behind her to shout “sit down, you need to sit down right now,” twice tossing a lime at her back when she wouldn’t. “You know that you cannot speak to them without it escalating because they have no respect for you or your son, and this will only end badly for you,” she wrote. “This is why many black people are uncomfortable being in predominately white spaces.”

And Kraftwerk in 3D at the Orpheum was a mostly white event, at least cosmetically — ironic since hip-hop has embraced Kraftwerk more thoroughly than any other genre. Jay Z and Lil B, among many, have sampled their music for songs.

As a white male present at the concert I felt a need to ask myself a few questions about racial perception. Knowles was right about one thing: white people just don’t get dancing.

But I then realized my thoughts didn’t matter. What mattered was how an oppressed minority voice perceived the events around her. So where exactly was the truth? In-between, where it usually is.

The fact is that a group of white women behaved rudely and chose to harass a black woman and her family for dancing at a techno concert. Understanding why is when history comes into play, especially in a place still as segregated as New Orleans.

In a mostly white venue in a city once known for its slave stockades, the edgy dynamics of racial difference rise to the surface. And in a country where diversity still feels uncomfortable to some of the citizenry, race inevitably and constantly plays an abrasive role.

That won’t change — race will continue to be a troubling and unsettling issue — until people are willing to openly confront and discuss the dynamics endemic to all social interaction.

A more nationally recognizable analogy to the race issue came up during the first presidential debate in September, but it was triggered by gender. Donald Trump and his supporters deride political correctness as a left-wing infringement on the First Amendment. At the same time, they openly ignore both history and context.

Even assuming Trump didn’t have a known and publicly chronicled history of misogyny, his words just can’t be read free of his history of sexist behavior. For example, his apparent concern about Hillary Clinton’s health after her summer pneumonia scare, arguably sincere, didn’t mesh with the demeaning of her “look” and accusations that she lacked presidential “stamina.”

Context is essential, whether the subject is race or gender. Women still receive unequal pay. Some parts of American culture still represent femininity as a weakness. These realities automatically and legitimately taint Trump’s efforts to discredit Clinton. Bigotry comes to the forefront. It wouldn’t matter if he had a better record of advocating on behalf of women’s rights, of if he were expressing sincere concern about her recovery, anything he said would be difficult to separate from his poisonous background. The same holds true with the way racial matters are seen and responded to.

We as a nation seem to want to skip ahead to the post-racial, post-sexist, post-historical society we wish ourselves to be and represent — but without doing the tough work first. That work requires actual reconciliation, genuine integration, and a better understanding of each other another across the array of lines that make us different. Until we start that work, the concert crowd just won’t be what we want it to be.