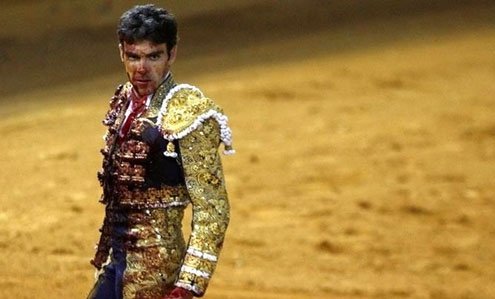 n Easter Sunday, José Tomás, Spain’s golden torero, stood slim as a Giacometti, arched and motionless in a small, magnificent bull ring as 600 kilos of angry, terrorized muscle followed his lead in the dance of the muleta.

I will not be going to another corrida. No more matadors.

Tomás’ bullring appearance came at the end of a week I spent in Sevilla, Cordoba, Cadiz, Jerez, Ronda and Malaga during Spain’s hallowed Semana Santa, or Holy Week.

Perhaps it was the juxtaposition of violent deaths — the symbolic death of Christ and the real death of the bull — that haunted me. Or maybe the processional glory of the tronos, silver and gold floats supporting carved figures of the crucifixion and resurrection. The floats exuded the perfume of hundreds of fresh flowers and were lit by as many thick, tall candles to help illuminate the slow waltz of the bearers. In some cities, the Christ or Virgin figures weighed so much that the bearers seemed hidden, except for their feet moving in a slow lockstep.

I am not religious, but Semana Santa lifted my heart while the corrida pierced it as painfully as a coup de grace. At least the bulls are butchered and eaten. That’s something.

But not something I wanted to think about.

Instead, I flavored my Spanish time with Andalusian tapas. They’re original, simple to make and available all over the region. At any moment of the day or night (except for siesta hours), tapas bars offer lively chatter, flamenco guitar, and so many small delights. Let me count (some of) the ways:

These of course come with caña beer or glass of wine or sherry, and a plate of local olives.

Tapas are a wonderful way to eat. Based mostly on fish or shellfish and vegetables, they’re tasty and generally low in calories.

Among my favorites is cazón in adobo, fried marinated dogfish (use can substitute monkfish, cod, shark or snapper). Start with 750 grams of bone-free fish, cut into bite-sized cubes.

On to the marinade:

which, trust me, your repertoire needs, so be patient until May.

My week in Spain left me smitten with Andalusia (in my next column, I’ll tell you about traditional shrimp pancakes). Even the unsettling corrida experience had a palatable end, sort of. We celebrated our final Spanish day at a small restaurant where I stuck to tapas. Not my husband. To honor the fallen, he ordered rabo de toro, tail of the you know what.

— If you have comments or food questions, please write me at [email protected].