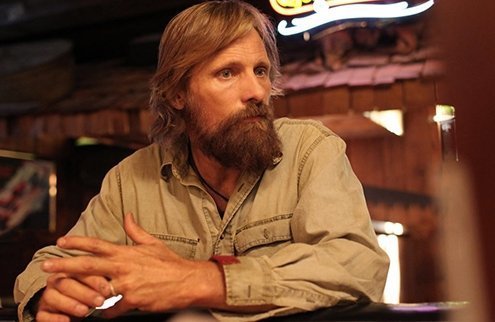 Viggo Mortensen is Ben, or Dad, or the leader of the pack.
T

he kids are impressive. One knows six languages. Another — eight years old — can recite the Bill of Rights and explain it, too. A third offers a sensitive, nuanced interpretation of Nabokov’s “Lolita.” They play musical instruments, sing and dance in hippies/1960s mode, and they’re all Olympic-level physical specimens, roped together while scaling an intimidating vertical rock wall.To emphasize their uniqueness, the kids all have made-up, one-of-a-kind names like Kielyr and Rellian.

Act One of this year’s summer release, “Captain Fantastic,” takes place in the backwoods of Washington state, where the somewhat feral kids hone their survival skills and (we are guessing here) study enough to become uniformly precocious, while living off the grid.

If it sounds too good to be true, it is. The kids — there are six of them, ranging in age from eight to 18 — are the product of an intense and demanding father/leader/teacher/philosopher (Viggo Mortensen as Ben, in a role just right for him) and, to a lesser extent, their mother, ill when the film opens, who never appears on screen but in flashbacks seems a softer person than Dad, while sharing many of his values.

A road-trip (Act Two) on a Ken Kesey-like bus, to Mom’s New Mexico funeral — “the mission” — exposes all father and kids to the “real world,” and serves as the backdrop for emerging parent-child conflicts and an interrogation of Ben’s domineering, manipulative, possessive, over-reaching, but somehow also attractive and charismatic, leadership. For whatever reason — consult Freud here — the boys, particularly, chafe under Dad’s authority and direction. The 12-year-old wants a normal life and a public school (though his normal-life role models are vacuous Xbox brats). And, despite all that rigorous home schooling, he struggles to articulate for his clever, “Socratic” father why celebrating Christmas might be a reasonable alternative to feting Noam Chomsky.

In a uproarious scene over-scripted by writer and director Matt Ross, college-ready Bodovan (played convincingly by George MacKay) discovers book-learning has not prepared him for a hot blond in a trailer park. Though money seems never to be problem, the gang participates jubilantly in a “freeing the food” caper reminiscent of Abbie Hoffman. At times it seems that it’s the 1960s counterculture that’s being interrogated.

Third acts are often less than satisfying, and this one fits the pattern. The film finally presents an alternative to Ben’s way — the stable, suburban, materialistic, sun-lit life of Mom’s parents — but the film’s not likely to end with Viggo driving away, the kids poolside at Rancho Grande, is it? Mom’s last will and testament — again, overdone — provides for a manic and oddly, unappealing penultimate scene. Rather creepily, the film brings together not only the family, but, as only Hollywood can, “makes the couple” — even though Mom has been dead for, well, quite a while.

So why this movie at this time? It plays into our culture’s obsession with over-parenting, for sure. It also may be appropriate at a time when at least part of the culture is challenging traditional institutions: the police, capitalism and religion among them.

At its best, “Captain Fantastic” is a subtle examination of the fine lines that separate charisma from fanaticism, democracy from manipulation, critical thinking from ideology, a caring, committed parent from an overly-controlling one. At its worst — which isn’t too bad — it’s just another “hilarious” family road trip. Think “Easy Rider” meets “The Great Santini.” The acting is uniformly excellent, and given that children are notoriously difficult to direct, that’s saying something.