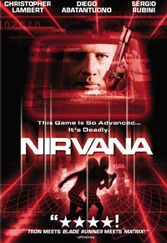 Who would have expected such a funky entry from Italian Gabriele Salvatores, who directed “Mediterraneo” and “Io non ho paura”? Flawed as it is, it still makes for a great pre-Matrix ride. Video game maker Jimi (Christopher Lambert) discovers that his new game, “Nirvana,” has a virus that’s humanizing its hero, known as Solo (Diego Abatanuomo). But when Solo realizes he’s just a figure in a game, doomed to repeat plays for eternity, he begs Jimi to kill the project, and him.

Meanwhile, Jimi flees his ruthless bosses — they want the game finished — into a futuristic suk-like Arab quarter. Salvatores walks a cultural and a technological rope bridge with high-tech gimmickry as an excuse. Unfortunately, the premise runs out of steam and the director eventually yields to run-and-gun cliché. Abantanuomo’s Solo is a pleasure to watch.