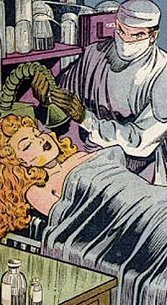 t was a warm spring day in 1964 when we decided to cure cancer. We were bored. We had world enough and time.

Andy gave us the idea. He lived at the end of the block with his dog Plato, his sister Samantha, and his father, whose name we never really knew because Andy said he was “Tassiturn,” which sounded foreign so we ignored it.

Andy, from Mexico and four years older, carried a little black book with big red words he’d copied from the dictionary, like “budding” (a kind of haircut) and “bravado” (the thing happens to girls when they grow their chests out and build nipples).

Andy said we shouldn’t talk about bravado, that it was a secret, so we agreed — not wanting to upset him. But we did think about it. (Samantha didn’t have bravado yet, so we couldn’t ask her — or tell her; and Plato was a plump cocker spaniel so we figured she didn’t qualify).

In 1964, life was good. We had sour cherry gum and model airplanes and Ace Titania comics, which Andy brought from Mexico. Ace Titania, said Andy, was a warrior prince with extra-national powers and a passport to several Spanish-speaking galaxies, including Calapytus, where every girl had big lips and were protected from The Evil Plague by swordmen. We asked for pictures but Andy said he’d left those particular comics upstairs, in his Dad’s room. Actually, his Dad had taken them away without saying anything.

Why, we asked Andy, would Tassiturn take away that particular comic? Was it the big lips or The Evil Plague?

What, Petie asked, is a Toomer? Was it like a frog?

Well, said Andy, it was this inner thing that grew. But then he got quiet.

So that was it, Petie exclaimed: Andy’s Dad was Tassiturn and had held on to the Ace Titania comic book because he had a frog stuck in his lung.

A malignant one, added Andy, which Petie immediately understood to mean that the frog or the lung or both were pretty dumb and required immediate attention.

To find a cure for cancer you need to know things about the universe. You need to know about, well, how fireflies light up at night. Toomers, Petie explained, were probably like the opposite of frogs, which meant they were “aminosities,” and if you could just get anti-aminosity near the Toomer, the Toomer would just leave.

But how could we do that?

Obviously, said Petie, exasperated, we’d have to make up a batch of anti-aminonsity ourselves and take it to the Toomer.

Shhhhhh, answered Petie, I’m thinking (but really, at that moment, he had his eyes on Sheryll, who was 13 and had Bravado).

Petie shouted, “Wanna see our anti-aminosity,” but Sheryll just grinned — “Wish again,” she said — and kept walking, so we had to go back to work.

At night, we trapped eight fireflies and put them in our garage jar. We then got kerosene and lube oil and cherry Jello powder. Crunch them all up good and we’ve got it, said Petie.

And so we did.

Anti-aminosity was brownish and had a pinch of wings, but seemed persuasive.

So we took in down the street to Andy’s house where Plato greeted us and Samantha looked at us with her go-away face.

Suddenly, Andy’s Dad came out on the porch. He was a stocky man with tufts of hair on his thick chest.

“What do you boys have there?” he smiled.

Petie was nervous. Should he call him Mr. Tassiturn? He settled on Mr. Andy, a polite compromise. “Mr. Andy, um, this is, anti-aminosity for your Toomer. We made it for you. You can get the frog out with this. Really.”

Andy’s Dad bent his head down and everyone turned quiet.

Finally, he smiled widely. “I think, boys, that if anything can get that damn frog out, this can,” and he took the jar inside.

We never really saw Andy’s Dad much again. We knew he passed away, of something, but no one said what. When we finally asked Andy what had happened in the end, he just said his Dad had laughed.

“Keep curing the cancer,” he told us, and then, in a matter of weeks, Andy, Plato, Samantha, and even spring, were gone.