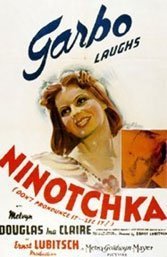 Those who insist fun and social commentary are snoring bedfellows have no case when it comes to “Ninotchka.” Here, complicit Greta Garbo and Melvyn Douglas, Ernst Lubitsch devises a charming pre-war romantic comedy layered with quaint political satire. Iranov, Buljanov and and Kopalsky, a Grouch Brothers-styled trade troika, arrive in Paris from Communist Moscow trying to pawn the jewels of Grand Duchess Swana (Ina Claire), a snobby white Russian who lives in Parisian luxury with her French count companion Léon d’Algout (Douglas). The people’s Moscow needs hard cash. But the precious countess wants her heirlooms back, and it’s caddish d’Agout to the rescue — until Moscow dispatches it’s heavy artillery, a poker-faced commissar called Nita Yakoshova, or Ninotschka (Garbo).

The film’s first half is delicious repartee between the d’Agout, smitten at first sight, and the very Bolshevik, luxury-room disdaining Ninotschka (“Who am I to cost the Russian people seven cows?”) Lubisch, with a script co-written by Billy Wilder, lays on the double entendre and the one-liners, Garbo delivering each one with glum gusto. Of Paris city lights: “I do not deny it’s beauty, but it’s a waste of electricity…” Of d’Agout’s flattery and flirting: “You are something we do not have in Russia, which is why we have a great future…” Of Moscow’s 1930s show trials: “The last mass trials were a great success. There are going to be fewer but better Russians.” But love, luxury and d’Agout eventually seduce the commissar, and the romance — “Lovers of the world unite!” — goes from there.

Lubitsch never really relinquishes his political message, which though pro-capitalist isn’t entirely unfriendly to Soviet tenacity. When Swana and Nitochka finally go at it, it’s like a catty war of civilizations: neither the nobility nor the proletariat gets the obvious upper hand. The love story, albeit overplayed, doesn’t lack for poignancy, particular given the year of the film’s release, 1939. “Bombs will fall, civilizations will crumble, but not yet,” says the rueful Nitochaka. “What’s the hurry?”

The hurry was history, and by year’s end Europe was at war and once-feasible humor overtaken by a conflict that would moot the white-red Russian rift. All the more reason the film-opening panel says the story is about a time “when a siren was a brunette and not an alarm.”