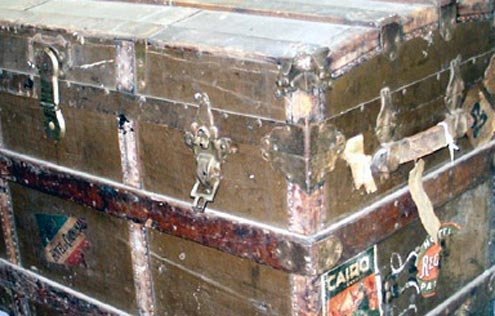 Did some pharaoh-like curse on these trunks emanate travel spirits that kept my family on the go for decades?
I

recently wrote a column about the contents of my baggage. This time it’s about the luggage. It began with Ninga, as my great-grandmother was known. A widow with five grown children, Ninga closed her house and moved into a residential hotel on Chicago’s North Shore. She gave away everything that would not fit in two trunks and then she took to traveling. One trunk she took; the other stayed behind in the hotel basement with everything else.

I still have the trunks. Her name is hand painted on them in red Roman letters. Tags from shipping lines and stickers “Wanted/Not Wanted during Voyage” cover their dark green steel sides. The one that stayed behind is huge box with a removable tray, lined with flowered paper. The one that went along has drawers, its own hangers and rod and a foldout ironing board.

They were locked for decades until I opened them. Inside were a historic compendium of the U.S. passport — from a single folio-sized sheet in 1912 to a “not valid in Europe” booklet-style one of 1940 — a beaded dress from the 1920s, numerous letters and the striped silk slippers my great-great-great grandmother wore for her wedding. Did some pharaoh-like curse on these trunks emanate travel spirits that kept my family on the go for decades?

Each trip left something new. India left my brother and sister with matching Qantas shoulder bags. I envied these and my siblings’ participation in family legends that did not include as-yet-unborn me.

Back home, our luggage waited patiently in the attic, giving off the smell of leather and far places.

The next big adventure after India was a six-month, around-the-world trip in 1971. I got to go this time, but my sister didn’t.

This itinerary followed Ninga’s 1928 route and my father’s 1942 one, when he was a Navy Medical Officer in the Pacific. We sailed from San Francisco to Australia, on the Matson Line, just like my great-grandmother. Mom read us Ninga’s diary of her trip. Dad regaled us with stories of his tiny ship-the first into Manila, the first into Tokyo.

We visited Quinn’s bar in Papeete, Tahiti. In the Philippines we visited Corregidor and stayed in the Manila Hotel, which I knew from old postcards of Ninga’s. My father knew it from the war when “we” and the “Japs” fought each other from alternate floors.

In 1971, such grand old hotels were not yet tarted up for expense-account travelers. The Manila Hotel had louvered mahogany doors and ceiling fans; algae floated on the swimming pool, whose walls were still pockmarked from the battle.

The Ferguson was an army-green canvas duffle bag that was already in the attic when we moved into our house. Ferguson was stenciled on it, even though no one named Ferguson had lived there. We’ll never know.

The sea-bag was on its second tour of duty. Its first was with Dad in 1942. In fact, only a fit young sailor — and my brother — could manage this bulky green canvas sausage. It had no handle and no opening except the top. Whatever you wanted was always at the bottom.

The Big Brown was my father’s Hartmann, canvas with leather trim and brass corners. It was covered with stickers that would make a young journalist weep for Cold War glory days: the Majestic Hotel in Saigon (Ninga stayed there too), the Rossiya in Moscow, BOAC (the British Overseas Airways, Corporation, precursor to BA), Pan American airlines, the Oriental Hotel in Bangkok…

The Big and Little Blue were my mother’s; also Hartmann with leather trim. She received them as a wedding present in 1942, a week before my father slung the sea-bag on his shoulder and boarded his half-built ship for the voyage from Chicago to New Orleans, where it was launched.

The scuba bag was a recent addition, reflecting my father and brother’s dream of exploring the Great Barrier Reef during the Australian part of the trip. There were storms, and we carried all that gear for nothing.

The camera bag was my father’s; velvet-lined and leather, with two outside pockets too full to close and anyway the buckles were broken. In addition to camera gear, it carried a pair of disposable nylon handcuffs. He never traveled without these, because during a Pakistani Airlines flight on which a Sikh traveler had a seizure, they would have been handy. Instead he had to cut up the seat belts with a Swiss Officer’s knife to make restraints. That bag, and two Zeiss cameras plus lenses, wore holes on the left shoulder of all my father’s jackets. Like an old boat, he listed to that side too.

None of the bags had wheels. We had a complex relay system, handing bags through train windows with 11-year-old me standing guard while the others shuttled them around. In some countries, hiring a porter was a charitable obligation. In India, they carried the sea-bag on their heads.

Times have changed. My first bag with wheels was a wedding present in 1992. Its life ended in a fire in a Milan repair shop.