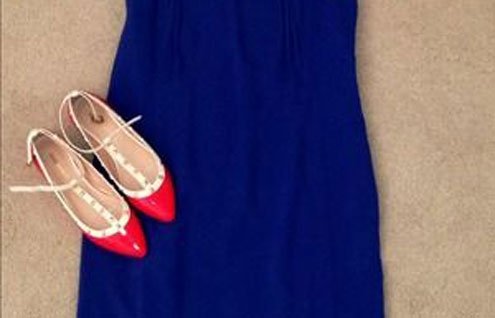 First day at work dresses are sometimes never worn.
I

turn 25 at the end of January. While I’ve come to peace with reaching the quarter-century mark I realize that there are certain things I’ve yet to accomplish that my peers have. Four years of living in two Italian cities have made me uncomfortable behind the wheel of a car, especially on the highway. I don’t know how to roast a chicken or casually date. I’ve also never held a nine-to-five job, which I sheepishly admit to friends and family.

My former college roommates, now full time employees, discuss the horror of alarm clocks screeching at 6 a.m., and yet I still can’t help but feel it’s a rite of passage that I’ve yet to fulfill, a box to check in order to be considered a true grown-up.

This is a worry that has persisted since I was 18. My summer job was “working in a radiology practice” which sounded quite professional on my resume, but in reality the radiologist was my father and I spent most of my time organizing the file cabinet and reading expired issues of Us Weekly. Instead of punching a time card for a half-hour lunch like the rest of my colleagues, my father and I would eat at my grandmother’s house down the street, indulging in pasta with tomatoes and basil from the garden and thick slices of homemade bread, lunches that lasted well over the allotted 30 minutes.

It wasn’t as if I didn’t try — Blockbuster never called me back, nor did Subway or the froyo bar. My sister, a full time camp counselor, would regale us with stories of snotty nosed kids and unexpected allergic reactions with a sort of tired pride. I was secretly envious of her paycheck and perfectly tanned complexion.

Upon graduation I secured a job as an English teacher at a language school in Bologna. I paid $1,000 for a weeklong course that would teach me how to plan an enriching syllabus and explain the past perfect, and my mother bought me a stylish blue wrap dress from Ann Taylor for my first day.

I soon realized that this wasn’t the “real job” I had hoped for — my time sheet summed up to a total of a brief 14 hours a week, resulting in a measly paycheck indeed. Instead of inspiring legions of bright-eyed Bolognesi children I found myself failing and attempting to capture their imaginations. Coloring seemed to be the only way to quiet them, which I reasoned ate up a good twenty minutes of class time. This would be finished off with a few solid rounds of Bingo. “Sticker,” my prize of choice, was surely the only word the children retained at the semester’s close.

I watched the hands of the clock move at a sluggish pace, perspiration gathering at my hairline. It was when I was told by my boss to incorporate a sock puppet monkey named JoJo into my lessons that I decided to move to Rome. Perhaps there I would discover a deep seated talent or stumble upon my dream job, and I eagerly wrote to publishing houses and NGOs, universities and companies, only to end up with another teaching job. When people at home asked what I did in Rome, I replied, “I teach English.” Calling myself a teacher seemed somehow false, categorizing myself with those who actually worked passionately in the classroom.

My destiny finally arrived in the form of a job advertisement seeking an English mother tongue to work in the casting department at Rome’s famed movie studios. During my interview, the words “€500 a week” — about $650 — buzzed in my ears, a joyous chorus. My boss casually mentioned working with Mel Gibson, and spoke fondly of Monica Bellucci. Candid photos of Matt Damon hung on the walls. The past two years of an €800 monthly wage seemed to melt away in an instant. I at last had “a big job” as my mother would say, one I could proudly post on Facebook, one that made living in Italy make sense to those at home. I imagined myself meeting famous actors and learning to work the impressive tripod audition camera, captured in paparazzi photos.

Months passed. I translated scripts and read lines to actors. I organized the database and responded to emails pleading for auditions. “Thank you for contacting us. We will get back to you shortly,” I replied as instructed. I flew back from my summer vacation early for work. And I never earned one euro. “Why should I pay you?” my disgruntled boss asked when I inquired for the last, and final time about a salary. I thanked her, politely, and left for the day. It was, after all five o’clock. I walked past the Hollywood sets and stages, leaving my dreams of a movie career with them. The work, quite honestly, was tedious and the actors mostly shallow. I calmly turned in my keys at the front desk and informed my boss via email I wouldn’t be returning. I needed some serious work.

I have found another job, but it still isn’t nine-to-five. I fill my time with museum exhibits and brushing up on my Italian, savoring my morning cappuccino. After all, there’s no rush. I’ll feel like an adult one day, I suppose. My blue dress hangs in my closet, a little too small by now, worn just once.