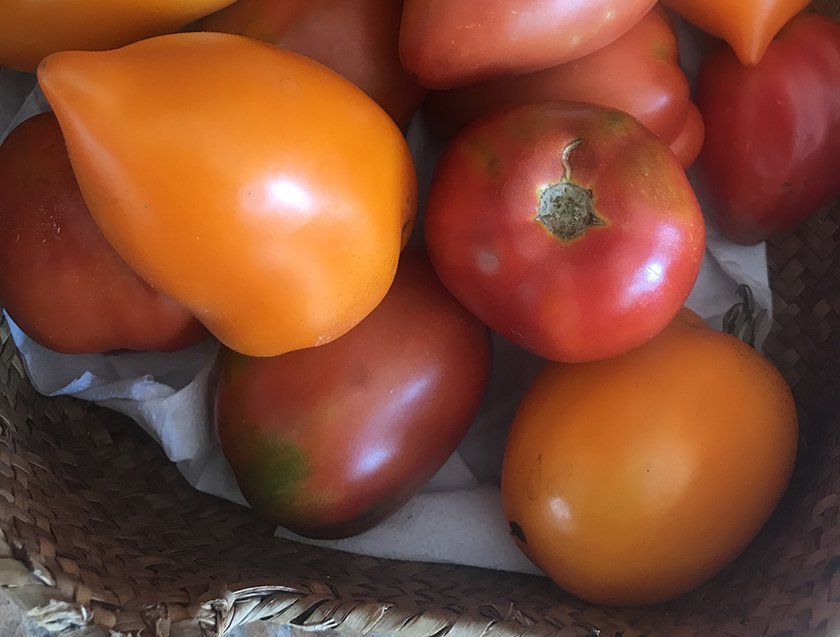 Summer is ending? So what? says the tomato. Author photos.
T

he feeling hits me every August, as if I had a moody inner clock lodged in my head. I get the sense summer is ending. No matter how hot it is outside. It’s as if I were a bystander as some shady figure walked up to summer, and said loud enough for me to hear, “Your days are numbered.” This sense of impending change might make my garden consider me quite mad. 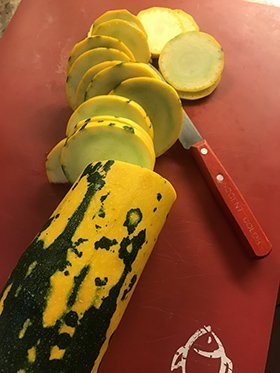 A time for slicing….

And based on what it’s up to I’d be inclined to agree with it. Clusters of Roma tomatoes hang like bunches of Italia grapes on their plants, each propped up with bamboo tee pees and threatening to collapse under the weight of a year’s supply of pasta sauce. I trawl the internet and call friends for new tomato recipes but get nowhere. But there’s a reason for this: the tomato, like an egg, is perhaps one of the world’s most perfect foods, but good, simple recipes are scarce. In my mind, a Roma tomato just off the vine, with a dusting of sea salt, can elicit all the sweet (and bittersweet) memories attributed to Proust’s madeleine, except, as they still say in the south of France,“more better.”

On sunlit mornings, the deep green plants lure me to start heating up a pot with olive oil and a few slices of sweet onion while I collect dozens of jewels for winter’s pasta sauces. If my mood’s a little different, mindful of summer’s end, I collect 8-to-10 whole tomatoes and place them in a sturdy freezing container to be brought out for stews, soups, ratatouille, escalivada, or omelets, my favorite for disposing of tomatoes. Basically, I’m looking ahead to a time when the garden won’t be so red and resplendent. And this is what I do, and what you too can do:
In an omelet pan, heat a splash of olive oil, toss in four or five ripe tomatoes, cut into chunks, and a clove of garlic and cook to a paste, adding a leaf of basil at the end. Remove the tomato mixture to a plate, add a little butter to the pan, and start your omelet. When it is half done, scrape the purée back onto the center of the omelet and flip one end over the purée and then slide the spatula under the fold and flip once more.

I suggest you serve this with a nice wine and salad, both crisp. To me, the concoction is manna from the garden.
But I still have hundreds of tomatoes threatening to disrupt my Zen stepping stone path and take

The deep green plants lure me to start heating up a pot with olive oil.

over the basil patch. Good bedfellows, those two. So I lop off the tops of my beefsteak tomatoes about a centimeter down (leaving a nice stem on each one), scoop out the centers, chop the pulp and mix it with fresh basil and a big spoon of risotto rice and olive oil for each one. I salt the mixture well, and put it back into the empty tomatoes, crowning each with its little hat. I bake them at 220 C for an hour, basting once with the juice, until the tomatoes are, as my husband calls them, “cremated”. That’s “caramelized” to seasoned cooks….

You may also add cubed potatoes to the dish to help support the fragile tomatoes as they cook, and at the end, I sometimes push a cube of mozzarella down into each before serving.

Even after this maneuver, the army of tomatoes is still marching toward the kitchen, and there must have been some been hanky panky during the last month, because hundreds more little yellow flowers are promising a new crop of little cherry tomatoes for September and October.

So I switch to the upside down tomato tart, an easy solution if you don’t mind buying ready-made puff pastry, but if you can bring yourself to make your own, you’ll be happier. Ok, ok, buy the pastry and go with it. Heat the oven to 225 C. In a non-stick pan, heat some good olive oil, add a little chopped onion, a couple of cloves of garlic and sauté for a few minutes. Add eight to ten Roma tomatoes (or four large beefsteaks), chopped coarse. Let the tomatoes cook until cremated, er, caramelized, to a thick paste, and then add four or five anchovy filets and some fresh parsley, chopped. Put the tomato mixture evenly into a non-stick pie pan, brushed well with olive oil. Roll out the puff pastry to about half an inch, cut it to size for the pan and lay it on the tomato mixture, tucking in the edges.

Bake for 20 minutes or until the pastry is nicely browned and crisp. Let the tart sit for a few minutes before inverting it onto a plate: place the plate over the tart and quickly turn it upside down, being careful not to burn yourself. You may add fresh thyme to the tomato mixture and call it a French tart, but some may not understand that, but it’s best if kept simple to allow the tomatoes to shine.

Summer may be running out of days, but not my perfect red friends. In my hands, they’ll ignore the end of the season. Now if only I had more recipes for that huge zucchini.