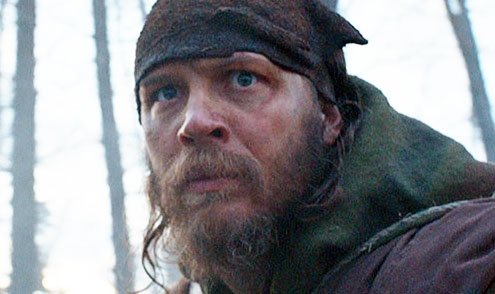 Tom Hardy's William Fitzgerald is the ace up The Revenant's sleeve.
I

n the Louisiana Purchase badlands of Montana and the Dakotas, William Glass (Leonardo DiCaprio) is a vital asset to the Rocky Mountain Fur Company. He once lived with Pawnee Indians, a captive who eventually raised a son, Hawk (Forrest Goodluck) with his squaw wife. But that’s in the past. She’s dead, murdered Westward-ho U.S. troops, and Hawk now flanks Glass as his pelt-hunting posse stake out game in the untamed snowy wilderness along the Missouri and Yellowstone Rivers.

Director Alejandro G. Iñárritu’s film is a stark, brutal and often stunningly beautiful revenge drama set in the pre-Kit Carson era and based on what is known of the real-life Glass (1733-1833) via Michael Punke’s 2002 novel “The Revenant: A Story of Revenge.” It begins with Glass’s men being ambushed by nomadic Arikara Indians in a scene that has the same kind of powerfully gory glory the Wagnerian side of “Apocalypse Now” brought to Vietnam and “Saving Private Ryan” pushed ashore on Omaha Beach. Glass and Hawk survive, barely, as does amoral William Fitzgerald (Tom Hardy), a veteran hunter who was once scalped and has no love for Glass.

But this savagery is a mere appetizer. The meal is served when Glass attacked by a grizzly bear in a scene of nearly incomparable ferocity. Cut to shreds, he’s left in the hands of son Hawk, a youth named Jim Bridger (Will Poulter) and Fitzgerald, who offers to baby-sit for money as others attempt to make it back to the nearest fort.

But hardscrabble Texan Fitzgerald sees Glass as a dead-man and loathes his stay-behind duties. Taciturn Hawk pays will pay the price for Fitzgerald’s cumulative malice, with Glass is left for dead. He’s not, of course, and his slow motion mission to track down Fitzgerald and redeem his son will consume the rest of the film.

This is mystical morality tale that makes the wilderness — it was shot in Alberta, Canada, California and Argentina — into its foremost character. The corrosive effect the wild has on both natives and interlopers gives the story its visual music. The people, whether Indians, French or American trappers, are incidental to the nature’s winter fury, which man imitates through his own brutality and, in the case of Glass, his vicious will to stay alive. Iñárritu borrows at times from the hues of Terrence Malick, whose “Thin Red Line” and “The Tree of Life” also reveled in giving nature a dreamily ominous dimension.

DiCaprio’s Glass is bearded and wounded, a master of grunts and wheezes, a man with at least nine lives, his mission all but handed to him from the start. He will survive, Samurai-style, to make good on his vengeance.

Strangely though, all this beautifully wrought rawness never comes fully to life, perhaps because Glass’s maiming is so focused and deep that he’s quickly less a man than the sum of his physical and emotional scarring. DiCaprio’s best acting is entirely physical, repetitive, labored in both aim and cadence. Hardy’s conniving, scalped and softly embittered Fitzgerald is something else again — an amoral creature who serves up greed and ferocity, with Hardy nailing each at the right moments. It is his movie when he’s present.

Once, the story goes, Winston Churchill turned down a dessert by saying, “This pudding has no theme.” While “The Revenant” has a theme, and Iñárritu spikes it with darkly Catholic brooding, there’s something missing here, as if the wilderness had suffocated its own story. Nous sommes tous sauvages — “We are all savages” — reads a placard French trappers place over an Indian they hang at random. Iñárritu can’t get enough of the concept.

Nor can Glass. “I ain’t afraid to die any more,” he say as he finally prepares to go after Fitzgerald. Of course he’s not. He died when his son was murdered. Just as everyone else who makes an appearance in this story has died at least twice over. Only the landscape is forever, and any awards it pockets it should share with Hardy.