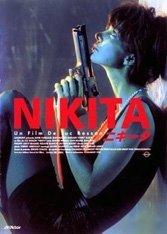 There’s a bit of “Barbarella” in Nikita. While Frenchified Jane Fonda was a plastic-cat-suit save-the-universe sex symbol, very French (Lycra-clad) Ann Parrilaud is a bad girl gone good to then be made badder.

Convicted police-killer Nikita — a lanky 20-year-old with a vicious temper — gets a formulaic proposal: You don’t have to spend your life in prison if you become a hit woman at the behest of the secret service. So what’ll be, ma femme? She gets training (Amande, Jeanne Moreau, among the instructors), a handler (Bob; Tchéky Karyo), and a license to kill. Remade, she falls in love with a checkout clerk. Which is of course when secret service comes knocking.

What’s good about the movie is Parrilaud. At the start she exists untamed and outside gender. But the assassin training and the ill-timed love affair are transformational. She develops a (confused) conscience.

“There are two things that are infinite,” Amande tells Nikita during killer boot camp, “femininity and the means to take advantage of it.” So, what’s it going to be, cuddling or killing? For a while, it’s both. But let’s not over-intellectualize: This is fun to watch, not ponder. (Oh, and Besson fell for Parrilaud; they married briefly.)