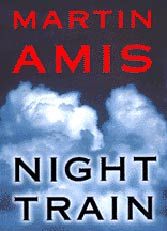 Amis got around to the torment of urban homicide when it was still postmodern society’s preferred malevolence. His female cop, Mike Hoolihan, probes a suicide in a “second-echelon American city” only to sense a second one coming: “That infantile feeling that you want to cancel worldly happiness,” she says. Hoolihan is tawdry and black and blue; it’s men — fathers, in fact — who most wreck the peace. The Night Train of the title is the act of suicide.

“Night Train” got Amis nothing but a big black eye. Elitists can’t write blue-collar detective fiction, whined critics. Fact is, Hoolihan is among Amis’ better inventions, and his “Blade Runner” city a triumph of claustrophobia.