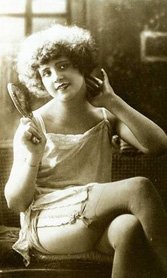 ast year, during the coldest winter months, someone spent the nights in my car. It was a 1994 Fiat Tipo, badly scratched and battered around the headlights. The front fender stuck out precariously. Each evening I’d lock the doors and activate the antifurto, making it impossible to open the car without sounding an alarm. I’d flip a secret lever disconnecting the motor. I’d park the car in the lot below our building or along the street. In the morning, I’d find the doors unlocked.

Nothing was ever stolen, not even CDs or coins. On the contrary, things were left behind: Food crumbs, candy wrappers, a box of tissues, a pocket flash light, a section of coat hanger probably used to get in. Once, when I forgot my briefcase on the car floor, I found it the next morning on the back seat, books and papers in a row of orderly piles.

Could the visitor be one of the homeless people who, wrapped in smelly blankets, roam our neighborhood, crouch in doorways and huddle on park benches? This was my first thought. A few years ago, destitute people were sneaking at night into the furnace room of our building. The janitor, drawn by the stench, discovered piles of filthy clothing and a broken window through which they’d been crawling. Remembering this, I was tempted to leave food in the car, the way you’d do in a winter bird feeder.

At 1 a.m., I’d stare out our living room window, wondering. The parking lot was dark, nothing visible inside the cars. The shops along the streets were shuttered and quiet, the sidewalks empty.

The piazza itself, however, benchless, treeless and deserted during the day, bustled at night. I’d see something like this: A big van, all day closed and abandoned, folds down its sides and becomes a sandwich shop or lurido, as it’s familiarly called. A husband and wife rush to fill the orders of numerous patrons who leave their vehicles clustered at the curb, emergency lights blinking. Traffic slows, cars sound their horns and the customers hurry away with their food. Teenagers in jeans and black jackets hang around laughing, spilling their cokes. Will they be using my car later?

Young girls in short skirts and high heels wait indolently on corners. Some of them, more enterprising, strut topless under unzipped jackets. The girls speak briefly with men who pull up in cars, radios blaring. They may leave with the men, only to return 20 minutes later.

Sometimes the girls disappear and, for a few weeks, transvestites take over. But the girls always come back. Every now and then tempers flare. There is pushing, running. Angry voices sound over the traffic noise, sometimes shrill crying.

A respectable couple passes through this crowd, arm in arm, looking straight ahead. A young mother, dark-haired and slim, pulls her daughter by the hand, almost running.

The police drive by, then return and stop their car. Other cars screech away. One policeman gets out and stretches his legs. The driver talks on a cell phone. Then he gets out and asks one of the girls to show her I.D. After some easy conversation, the policemen get back in their car and drive off. It is not only in front of my building that these things go on. If you drive at night, along the ring roads or on well-traveled roads through town, this is what you’ll see everywhere. The controversial Merlin law of 1958, made it illegal to maintain a house of ill repute, casa chiusa. Prostituting oneself, however, remains legal in Italy. Milan by night is a brothel. Could one of these girls be using my car?

By 4 a.m., the piazza has emptied. There is an hour or two of quiet before the greengrocer begins unloading crates and a cleanup crew comes through, emptying rubbish bins and picking up scraps with long handled tools.

My car looks empty but, once again in the morning, I find it unlocked. It doesn’t smell — not of dirty clothing, aftershave, beer or sex.

When, in springtime, the weather turns warm, my car is no longer used.

Now this winter, things have changed. In September a pub opened up on the corner and well dressed young people, some of them drunk, come and go until 2 a.m. Their presence drove the van and its customers two blocks up the road. The prostitutes moved a few blocks south. The homeless are everywhere but I have a new car, a zippy red Panda, and they leave it alone.