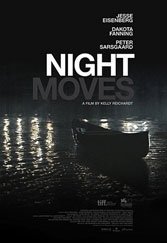 Sullen Joey (Jesse Eisenberg) and equally dour Dee (Dakota Fanning) are melancholy eco-terrorists determined to move up a notch on the make-a-difference food chain by blowing up a “salmon-murdering” dam on an Oregon lake. They buy a used speedboat called “Night Moves” and join up with Joey’s former Marine friend Harmon (Peter Sarsgaard) to fill the boat with explosive-grade ammonium nitrate.

Sustainable farm worker Joey is an introverted one-note man who when he stops to pull a dead doe from the road frets about the “life inside” — the doe was pregnant — and of the targeted dam rages, “Killing all the salmon so can run your iPod for every minute of your fucking life.” Rich-kid Dee jeers just as self-righteously: “In 2048 the oceans are going to be empty.” The more practical Harmon prefers fishing, and explosives, and calls cash “poor people’s money.”

There’s no mistaking the earnestness director Kelly Reichardt brings to his subject, though some of it is a ruse. The real tension builds — or is intended to build — after the deed is done, when an inadvertent human casualty casts a pall on the salmon-redeemers and begins unhinging them one by one. Do-good nerves fray and a crisis of conscience spreads like a rash. Once the militancy goes wrong, turning personal and sinister, righteousness collapses.

Good intentions aside, the whole is a fraught, molasses-slow affair that can’t quite nail down its thriller bearings, trapped between the portrayal and consequences of a “good” deed gone wrong and the portrait of immature Jessie, start to finish a deeply estranged man-child who has yet to understand the equal and opposite reaction theory, let alone acquire moral bearings.