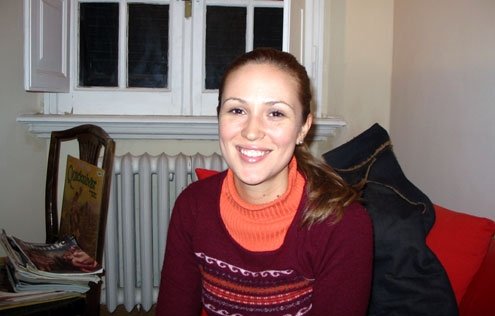 ever in a million years would I have thought that the skinny scrawny Italian boy that I met in Rome more than a decade ago would now become my husband. I still remember our sweet encounter like it was yesterday.

I was on an 11-day tour in the Bel Paese and everything seemed so foreign to me… and so delicious — the cappuccinos, gelato, the food…. and especially the men. I was 20 and freshly single.

My best friend and I had both made a pact to break up with our boyfriends before the big trip. It was the thing you did in your twenties. We were young and just wanted to have fun without anything standing in our way.

Our first stop was Rome. As soon as our plane touched ground, I could just feel that this city was going to steal my heart. Having just seen the Roberto Benigni movie La Vita è Bella before our trip, every whistle, Ciao and Buongiorno made me feel like a principessa in the Eternal City.

On our second night, the concierge at our hotel suggested we check out Testaccio, the heart of Rome’s nightlife scene. I’m not sure what led us to the Radio Londra — a locale, or nightclub — whether it was the taxi driver or our Miami gut instincts. Wherever there’s a line, the party must be good. So we chose that place.

My two friends and I walked up to the doorman and asked if they would let us in. They told it was a private party. My friend, who spoke some Italian, explained that we’d come all the way from Miami. We flashed some pretty smiles and our feet were in the door. The doorman, who also happened to be the organizer of the party, insisted on introducing us to his friends and cousins.

He brought me directly to Fabio. He was tall, slim and had jet-black hair. But it was his sweet smile that just melted your heart. At first glance, you couldn’t really tell whether he was Italian or Argentine. Our language skills were limited. His English was scarce and my Italian was well, non-existent. We could barely get past Ciao. But it didn’t matter. Our eyes spoke a thousand words. It was love at first sight.

I pulled out my Webster’s dictionary. It helped us blurt out a few more words. My friend who spoke some Italian was too busy with her Italian boy. Out of words but with so much to say, we did what any other kids in love would do. We thumb wrestled. Yep. We flirted and thumb wrestled the entire night right there in the middle of the club. Then the DJ decided to play Will Smith’s “Welcome to Miami.”

As we danced, we whispered in my ear with his very broken English, “Welcome to Miami. Do you know Will Smith?” We both giggled. He was buffo. But I liked him. After the song finished, my friend and I left the club with Fabio and another Italian boy. We got into his white Fiat Punto and headed on a tour of the Eternal City by night. The boys wanted to take us to Rome’s most romantic places.

We drove to the Pincio (Villa Borghese), St. Peter’s Square and the Gianiculum. I pulled out my dictionary again. But it was useless. So we went back to Plan B and thumb wrestled into the wee hours of the night. Just before he took us back to our hotel, Fabio whispers into my ear, “I want to keeessss jou.” I resisted. I told him that I didn’t kiss on the first date. I called him fresco (fresh), not knowing that it probably didn’t mean the same thing.

I’m not sure if he understood because he whispered to me again, “I want to keeessss jou.” Realizing that there might not be another date, I gave in and kissed him. It was sweet and innocent.

Little did I know, years later that sweet bacio we exchanged in the back of his white Fiat Punto would change my life forever.

— Nicole and Fabio were married on September 5 in Rome.