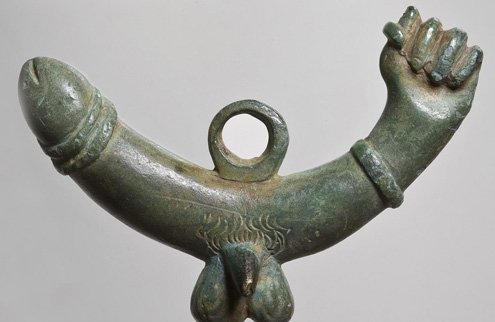 The Romans got a jump on everyone when it came to showing off.
I

was 11 weeks pregnant with my first child when my gynecologist saw something and said, “Congratulations. It’s a boy.”

My grinning husband was over the moon. “Jew know what dat means don-e you?”

“Yes, Marco,” I replied in a non-plussed monotone. “He has a huge penis…” (Pause for comic effect) “…just like his mother.”

My boy fetus obviously overheard the one-liner because once unleashed into the world he ran with it. (Note: I played Mozart to my pregnant belly but I guess he didn’t pick up that.)

Two years ago, when we interviewed for kindergarten at a prestigious international school, the headmistress greeted my older son, “Hello Leonardo,” and then turned to my younger one, “And who is this?”

“This,” said Leo, “is Nicolò. He’s funny, but not because he tells jokes. He just pulls his penis out a lot.”

If I’d been drinking, I would have done a spit take. It wasn’t true and I gave Leo the fisheye, as if to say: You don’t open with a dick joke. “Nico told me to say that,” he said. Nico just grinned.

I managed to salvage the meeting and they were both accepted. But what had I created?

Months later I got a call from school. The teacher was giggling a bit. “Well, it’s not funny,” she said, “but Nicolò showed something private at the lunch table today. We’ve had a discussion but we thought you should too.”

“Mom, everyone was laughing at me,” he told me. “But then everyone started laughing at Giorgio. But I wanted them to laugh at me — so I just pulled it out.”

I thought about this. “If you want to make people laugh, use your head,” I said. Nico just stared at me.

“The one between your ears.” His private parts, I told him, were private. I didn’t want to create psychological scars so I left it at that.

Now he’s in first grade. He’s a model student with lots of friends. In fact, everything was going smoothly until last week, when I got a call from the teacher. “I’m laughing but I am not laughing,” but she was laughing. “Some of the girls’ parents came in today to tell me that…”

Apparently, my attention seeking little guy had decided to create a special project during a drawing class. He colored his penis green, whipped it out, and said, “Hey! Look! Art.”

The performer in me thought, “Know your audience, dude! Performance Art won’t go over in this crowd.”

Then my mommy brain kicked in with a simpler question: “What the f*&% is wrong with him?”

One time could be cute, but twice meant heading into Pee Wee Herman territory (who, by the way, is quite talented).

In addition to being mortified, I took all this very seriously. “Why would you do that?” I asked him.

“Mom, I wanted to make them laugh. I need to make people laugh.”

God help him, I thought.

I then focused on what a good and responsible mother should say.

“Do you realize that a girl’s father could call the police on you?” That might not have been either good or responsible but it’s what came out.

His timing was impeccable. He was funny.

“Mom, you always make people laugh and I want to, too.”

“Yes, but what if I made everyone laugh by using my vagina? Wouldn’t you feel horribly if I went around your school showing everyone my vagina?”

“I think they would feel horribly.”

This kid, I thought to myself, is throwing punch lines at my parenting.

The comic in me wanted to laugh but the mother in me couldn’t.

“This is not okay. What should the consequences be?” Again, I was working hard to avoid creating scars that might make him into a sexually repressed man-child.

He didn’t blink. “Don’t give me food or water for 14 days?” Ridiculous, I told him. “Make me go live with the gypsies for the weekend?”

They’d return you, I shot back.

I stared him down. “No screens for two days.” No iPad.

Three days later he did it again, showing his bald-headed giggle stick to a gaggle of friends. Proving that “third time’s the charm” is not always funny.

This time around I set aside worries about psychological scarring and sexual repression. I wanted to land a punch.

“You want to show off. Let’s show these kids something else!” I dropped his drawers and smacked his bare bum three times. He laughed. I smacked it three more. He cried.

“So will your penis if you take it out again!”

“Hey! That that’s not funny!” he countered.

Now he knows he’ll have to find a different first grade comedy routine.